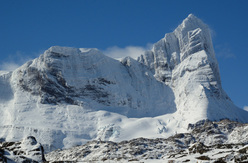 Monte Giordano in Chile and the long ridge climbed by the route Shark's Fin Ridge.
Photo by Ralf Gantzhorn 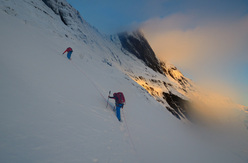 Climbing into the night.
Photo by Ralf Gantzhorn

Shark's Fin in Chile by Jasper, Heller and Gantzhorn

In April 2012 Robert Jasper, Jörn Heller and Ralf Gantzhorn carried out the first ascent of the Shark's Fin Ridge. The route climbs the west face of Monte Giordano (1517m, Chile), a mountain which in all likelihood has never been climbed previously.

Destination Terra del Fuego in Chile for the alpinists Robert Jasper and Jörn Heller, and photographer Ralf Gantzhorn who last April climbed the western ridge of Monte Giordano which they named Shark's Fin due to its spectacular form.

Starting from Puerto of William, the three alpinists reached the mountain after three difficult weeks of sailing through rough weather, and then they continued to battle hard against the adverse conditions which characterise this area. After a first failed attempt and Jörn Heller breaking his rib on the boat, the weather improved just three days before their programmed returned. At this point Jasper, Heller and Gantzhorn didn't wait to basked twice: the set off on 6 April and reached the summit shortly after midnight after 12 hours of ascent. 15 hours later they were safely back in the cabin of their boat, after having rested for 4 hours beyond the difficulties back in the forest.

"We were quick and this was the key to success" Jasper told planetmountain, adding "The ridge is beautiful and we needed about 5 hours to climb it. On the fin we reached the crux: a short abseil. We couldn't leave a fixed rope and we knew that they only way back would be to climb back up this section. It felt like a mousetrap, but at circa 3.00am and in worsening conditions we managed to climb this 30m section, with difficulties estimated at M7. Yes, it was a great adventure."

This relatively unknown mountain is referred to in different ways on the local maps: while the Chilean nautical map indicated Monte Buckland, the Argentine map drawn by explorer Alberto M. de Agostini in 1959 refers to the peak as Monte Giordano. Prior to departure the three had carried out intensive research but found no information regarding prior ascents, it is highly likely therefore that theirs is the first ascent of the mountain. What is certain is the altitude and summit GPS co-ordinates: 1517m, S 54°27`11s, W 070°12`11s.