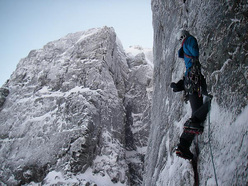 A series of hard repeats and first ascents on Ben Nevis, Coire an t-Sneachda and Lochnagar, including the second ascent of The Hurting (XI,11 Dave MacLeod, 2005) by Andy Turner.

Scottish winter climbing is in full swing and shows no signs of letting up. While Ines Papert and Charly Fritzer were active on Ben Nevis and in the Cairngorms, a handful of other local climbers have managed a flurry of high end repeats and first ascents.

On the repeats front, the biggest news is probably Andy Turner and Phil Dowthwaite's long-awaited second ascent of The Hurting (XI,11) in Coire an t-Sneachda. The route had been established in 2005 by Dave MacLeod after abseil inspection and at the time it was hailed as the hardest single pitch traditional mixed climb in the world. Turner - who in 2007 established The Secret on Ben Nevis - repeated the route on January 28 in near white-out conditions after a failed first attempt a few days earlier. The on-sight repeat still awaits therefore and will no doubt mark a the next step in Scottish winter climbing.

On the same day as Turner and Dowthwaite repeated The Hurting, Tim Neill and Keith Ball made the first repeat of Storm Trooper (VIII,8 Andy Turner & Steve Ashworth 01/2008) on Creag Coire na Ciste, Ben Nevis, commenting that the route was simply "brilliant". The next day Neill and Ball returned to Ben Nevis and pulled off another significant second ascent by climbing the nearby Archangel (VII,7, Chris Cartwright & Simon Richardson 02/2005).

January 29th proved interesting for another reason: Ewan Lyons and Ewan Olivarius inadvertedly added a 320m direct start to "Route Major" on The Little Brenva Face, Ben Nevis. Their Right Major (IV,6) came about due to the duo missing the main start in the mist, and is "a weird and wonderful variation before joining up with the parent route."

Last but not least, on February 6 Simon Richardson teamed up with Sandy Simpson and the two made their way to Eagle Buttress at Lochnagar where they established Eagle-Eye, a line of grooves to the left of Where Eagles Dare. Richardson commented "Tenuous bridging, limited pro, screaming calves and biceps and a double surge of adrenaline led to an exposed stance by the headwall. We had reached an impasse and thought we were going to fail on the final pitch, but just as the shadows began to lengthen across the coire, we found a way through the bulging grooves above that opened the way to a ramp leading the crest of the buttress and an easy romp to the top."

For more details about the individual ascents and photos check out www.scottishwinter.com while a video reconstructing MacLeod on the Hurting is posted below.