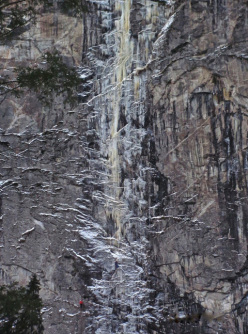 On 15/12/2012 Markus Pucher and Alois Krenn made the first ascent of the extremely difficult new icefall Schwarzer Engel (WI7+, M7, E6, 160m) in the Maltatal, Austria.

Five pitches, 160m high, difficulties up to WI7+, M7, E6. These are the impressive credentials of Schwarzer Engel, the "Black Angel" icefall first climbed in mid-December in Austria's Maltatal by Markus Pucher and Alois Krenn. Ascended without bolts and only a handful of pegs, the thin, ephemeral drip is certainly one of Austria's hardest ice climbs along with Centercourt by Albert Leichtfried and Benedikt Purner, with "a crux 40m pitch which accepts practically no gear whatsoever."

Markus Pucher was mentioned in one of our reports recently when we mentioned the fact that he had carried out the highly sought-after first repeat of Land Under in the Gasteinertal. We now have details directly from Pucher himself: the 36-year-old Mountain Guide made the first repeat of the icefall established by Hans Zlöbl and Gernot Lachmaier together with Toni Ponholzer on 19 December. According to Pucher "the climbing was very demanding, even on sections which were difficult to protect and I reckon the crux pitch is somewhere in the region of WI7- grade. The route is superb and I have to say the first ascentionists were outstanding in seeing and climbing this line back in 1998."

Pucher is currently on his way to Patagonia for an extended, six-week trip and with his sights set on Cerro Torre and a possible new route, hopefully we'll be hearing more of him in the near future.