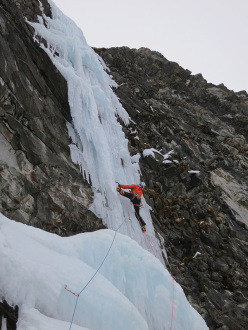 The alpinists Gerhard Fiegl and Simon Gietl have made the first ascent of Schwarze Witwe (WI6 M5, 800m) up the North Face of Hohe Warte, Zillertal Alps, Austria.

On 22 December Simon Gietl from Italy's South Tyrol and Gerry Fiegl from Autria's Ötztal forged a new line up the North Face of Hohe Warte, a 2943m high peak in the Zillertal Alps.

Taking a line to the right of Moonwalk, the route established in 2009 by Albert Leichtfried and Benedikt Purner and known as "the longest icefall in Austria", Gietl and Fiegl climbed difficulties up to WI6 M5 to establish their Schwarze Witwe, the black widow.

"The route is a combination between classic north face terrain and steep ice" Gietl explained, adding "the crux of the route isn't particularly nice to look at, on the contrary, it looks a bit like an enormous black spider, hence the name."

Schwarze Witwe
Hohe Warte, Austria
First ascent:
Gerry Fiegl, Simon Gietl 22/12/2013
Gear: ice screws, 1 set of friends, 2 pegs, 2 x 60m ropes
Start: Vals, Schmirntal
Approach: From Innsbruck take the A13 towards Italy, exit at Matrei / Brenner and follow signs to Vals. At the end of the valley park at the Gasthof Touristenrast. Continue along the forest road towards Geraerhütte. Circa 200m after the cable used to transport goods follow the riverbed rightwards, up the right-hand side of the valley to reach the base of the mountain. The route sis reached by skinning in with skis in about 2 hours.
Descent: from the summit continue easily along the ridge to reach the top of "Moonwalk", 1 bolt with sling, from here abseil down this route
Note: make sure the snow pack is stable