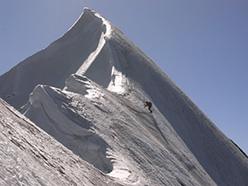 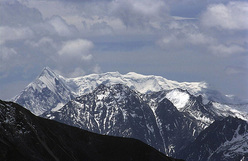 On 28/11/2009 the Danish climbers Kristoffer Szilas and Martin Ploug reached the summit of the hiterhto unclimbed Ren Zhong Feng (5800m) in the Sichuan range in China via their route Lost to Ice (TD: M4, WI4, 1300m). During that period four Hungarian climbers went missing on the same mountain.

At times not much is needed to fuel an unexplored dream. In the case of 27 year old Kristoffer Szilas e 35 year old Martin Ploug, it all began with a photo taken by Japanese explorer Tamotsu "Tom" Nakamura. Love at first sight? Perhaps. The fact of the matter is that last October the two Danish climbers, together with Carsten Jensen, travelled to the far east, for that 5800m high virgin summit located a day's drive southwest of the Chinese metropolis Chengdu.

Their dream then came true. After having established base camp at 4500m, in four day they carried out an alpine stile ascent of the 100m high east face and the 1.5 km long north ridge, reaching the summit on 28 November. They two had an turmultous time rendering the experience, apart from its technical difficulties, an adventure hard to forget.

"The route was very long and tiring because of the long ridge, but it was free from objective dangers" Szilas stated, adding "the route went at TD: M4, WI4, 1300m with most technical difficulties on the east face, but storm and bulletproof ice on the north ridge made it a long and tiring climb to the summit (18 hours round trip from our third bivvy site). At night on the way down from the summit Martin slipped while trying to place an ice screw and fell 30 metres down the 1000 metre west face, but luckily I managed to do a classic ridge jump onto the east face just in time and thus saved both our lives. He was bruised but assisted by lots of pain killers he was able to continue back to the bivvy, were we rested the next day before heading down to base camp."

On his return Szilas stated "I think we pretty much picked the plum of the area. The surrounding peaks did not have the same character to them. In Sichuan I think the action is going to happen in what Tom Nakamura calls the Gorge area further out west where there are tons of unclimed peak that looks interesting."

A final tragic note. Shortly before their departure for Chna the Danes found out that a Hungarian team comprised of Peter Csizmadia (37), Veronika Mikolovits (35), Balazs Pechtol (31) and Katalin Tolnay (36) had failed to return from the mountain as planned. Despite search operations launched by the Sichuan Mountaineering Association, there have been no signs of the missing climbers. This too provides a measure about the level of adventure and alpinism which, for better or for worse, mountains offer.