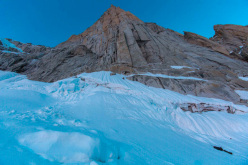 The East Pillar of Fitz Roy, 2015
Photo by Pascal Fouquet 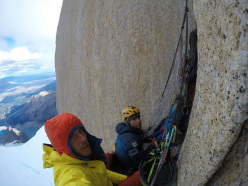 On 19 January 2016 the Italian Ragni di Lecco alpinists Matteo Della Bordella and David Bacci made the first repeat of Via dei Ragni up the East Pillar of Fitz Roy, established in 1976 by Casimiro Ferrari and Vittorio Meles.

Additional good news from Patagonia after Colin Haley’s first solo ascent of Torre Egger and Punta Herron: just a few kilometers away on Fitz Roy, David Bacci and Matteo Della Bordella have completed the first repeat of Via dei Ragni, forged in 1976 up the East Pillar by Casimiro Ferrari and Vittorio Meles.

Della Bordella attempted the route last year together with Luca Schiera, Silvan Schüpbach, Luca Gianola and Pascal Fouquet but the alpinists were forced to abandon their attempt after having climbed 750m. The "cumbre" has now been achieved via the same line ascended, with great determination and after six days on the mountain and some impossible bivies, by Ferrari and Meles in February 40 years ago.

At present there are few details to go by, all that is known is that the two Ragni di Lecco alpinists, who have climbed together from Corsica all the way to Yosemite, were caught in a storm, endured a bivy until the storm abated, and then continued to the summit. What is certain is that, 40 years after the first ascent (hats off to the first ascentionists), this is another great chapter in Patagonian climbing.