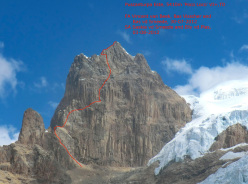 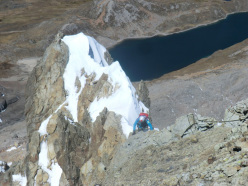 "In July and August a five man Dutch team consisting of Bas van der Smeede, Elly van der Plas, Bas Visscher, Vincent van Beek and Saskia van der Smeede travelled to the far south-east corner of the Cordillera Huayhuash intent on establishing a new line up the stunning east face of Puscanturpa Este (5410m). We had been inspired by the Slovanians Pavle Kozjek and Gregor Kresal who climbed the mountain in 2007 and we were eager to forge a new line up this beautiful face.

After a long mountain drive we arrived in Cajatambo, a romantic mountain village located to the south of the Cordilera Huayhuash. Because of a fiesta all the locals were celebrating and playing music in the village centre and it was a real pleasure to hang around for a few days. We then set off on our two-day trek and established base camp close to a large lake called Laguna Viconga at 4500 meters.

After having climbed two 5000 meter peaks for acclimatisation, we set of early one morning only to discover that the steep snow which led to the face proper was in a terrible condition. The sugar-like snow simply didn’t allow us to reach the face, so that same day we hiked around the mountain to take a look at the imposing north face; as soon as we caught sight of this we decided to give this previously unclimbed face a go.

We returned early two days later. The first hundred meters of this face is comprised of overhanging columns without any cracks, so we started by climbing the first pitch of the Slovenian route. Because it was bitter cold, only Bas and Vincent dared to give the climb a go and after the Slovenian start we traversed back onto the steep north face. Despite the cold it was a pleasure to climb these granite columns at about UIAA VI. Bad weather arrived and at circa half-height Vincent and Bas decided to bail.

On the 30th of July we returned with all our bivy gear in order to stay on the face for as long as necessary. After the first pitch the wind blew so strongly that the two girls, cold to the bone, decided to retreat. Bas, Vincent and I kept going and climbed the steep granite with extremely cold hands. After the traverse we found a way through another section of overhanging columns at about V+ and this led to easy terrain above. To avoid loose rock we tried climbing a straight line through the steep summit headwall, but after two pitches (VI and VI+) we were stopped by a blank section and had to traverse left to the ridge. The ridge was so broken we were scared to continue but after a few minutes spent deciding what to do we chose to give it a go. We summited at around three o’clock and called the route “Poco Loco” because of the crazy loose rock. The grade is VI+, TD and this is likely to be only the third ascent of the mountain.

Two days later Elly and Saskia gave the mountain another try. This time there was no wind and in a 16-hour roundtrip they also succeeded in climbing the route."