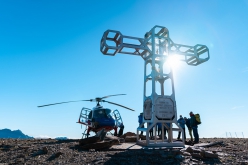 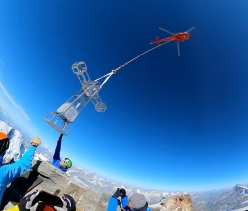 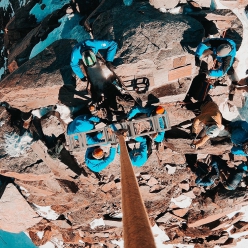 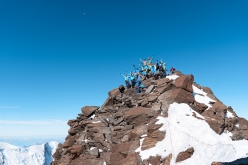 The video of the new cross on Punta Dufour, at 4634 meters in altitude the highest mountain in the Monte Rosa massif.

The new cross has been placed on Punta Dufour, at 4634 meters in altitude the highest mountain in the entire Monte Rosa massif. The previous cross had fallen, precisely when is unclear, down the south side of the mountain after being erected on the summit in 1964 thanks to the Edelweiss Amici della Montagna (Geam) Group.   Built in steel and based on the original design, the new cross is 1.60 high and weighs around 80 kilograms. After having constructed the base at the beginning of September, on Wednesday 9 September the cross was transported by cable car to Passo dei Salati and then by helicopter to the summit, where it was positioned and fastened by the Monte Rosa mountain guides. Here’s the video documenting the enterprise, made by Chiara Guglielmina and the Alagna Alpine Guides.