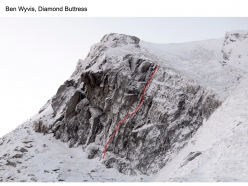 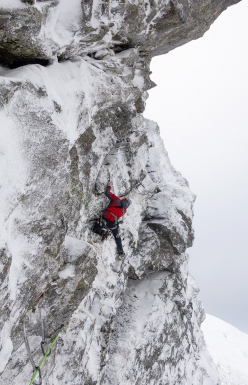 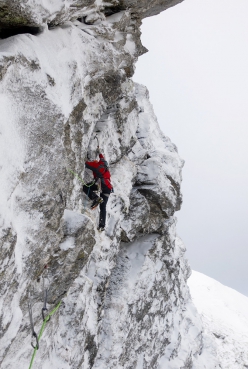 Winter climbing in Scotland: on 10 December 2021 Simon Richardson and Mark Robson made the first ascent of Princess Cut (VI,6) on Glas Leathad Beag on Ben Wyvis.

Conditions in Scotland are as fickle as usual, nevertheless Simon Richardson and Mark Robson managed to sneak in a fine first ascent on Glas Leathad Beag on Ben Wyvis. The little-know diamond-shaped crag was first discovered by Robson in spring 2020 during the first Coronavirus lockdown when people were only allowed to venture away from homes on foot or bike.

Last January he teamed up with Neil Wilson and established three routes, Winter Skills (V,6), Cycle of Doom (IV,5) and Six Finger Gully (II), but the central line remain unclimbed and, with the crag fully frozen, he returned on 10 December with Richardson.

The idea was to try the obvious offwidth crack, but the pair soon realised this would probably prove too steep and difficult. Richardson noted in fact "The top appeared to overhang the base for most of its length – I don’t think I’d ever seen such a steep winter cliff in Scotland."

After searching for alternatives the climbers opted for a hidden slanting fault running up and right from the lowest part of the cliff. The first pitch proved an excellent warmup for the crux second pitch, led meticulously in a 2-hour stint by Robson. Princess Cut is the name of this exceptionally steep, turf-based route on a cliff which will probably yield more in the future.