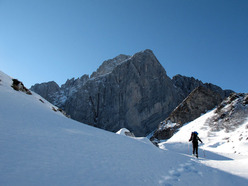 Onl 2-3/03/2012 Maurizio Panseri, Daniele Natali and Alessandro Ceribelli carried out the first winter ascent of the via Direttissima up the Presolana North Face.
Photo by 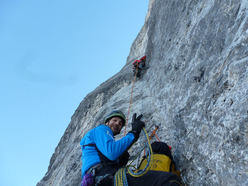 Onl 2-3/03/2012 Maurizio Panseri, Daniele Natali and Alessandro Ceribelli carried out the first winter ascent of the via Direttissima up the Presolana North Face.
Photo by

On 2-3 March 2012 Maurizio Panseri, Daniele Natali and Alessandro Ceribelli carried out the first winter ascent of via Direttissima up the North Face of Presolana, Italy. The report by Maurizio Panseri.

The time had come, after two winters waiting for this moment we were finally given the chance. This isn't a memorable winter, has nothing to do with those cold seasons during which the Rusconi brothers carried out their winter ascents, but according to the calendar it's still winter. It has to be said that there isn't much snow, the temperatures aren't too low either, but this takes nothing away from this fascinating face which had enraptured us a long time ago. Three years after our first winter ascent of nearby Via Palcido, Daniele and I are here once again to bring another dream to life, the Direttissima. We're joined by Alessandro. We're not out to prove anything, we're here simply because this a fun, fascinating game. Topping out in a single day would be possible too, by leaving the hut early, but our game involves a bivy on the route. There's a cave at pitch 10, a balcony which faces the void and the valley below, and we want to spend the night there to fully enjoy the magic imprisoned in these rocks. Perceive the earth as it rotates, observing the trajectory of the stars from our sleeping bags. Hear the mountain breathe during the coldest moments, while dawn creeps in. Leave the ledge in the morning sun only to dive back into the shadow to climb the final pitches up to the summit cross, chatting and smiling. This is what we search for, exclusive moments, united by the simple and ancient rite of climbing. We savour this unique taste as it melts into a smile and handshake.

Forty years have passed since Livio Piantoni and Rocco Belingheri, together with Fantini and Correnti, established the Direttissima on 23, 24 and 25 September 1972. The four used aid but didn't place any expansion bolts and the sections they free climbed are all in the region of grade VI. Despite few repeats and having poor in-situ gear, this route was freed at 7a. It follows a truly beautiful line and eight of its pitches ascend a series of corners, increasingly obvious, to reach the large diagonal roof before exiting left up overhanging, not ideal rock. While restyling the north face in 2007, Roby and Yuri re-equipped the belays, adding a stainless steel bolt and rehammering all the pegs, without adding anything except for a bolt on the crux section of pitch 2. In short, the Direttissima is worth a visit, in both summer or winter. You're bound to have fun.