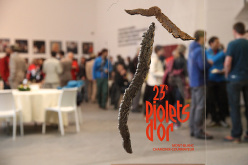 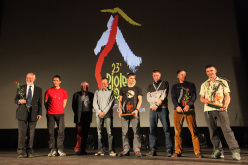 The videos of the three Piolet d'Or 2015 winning ascents: the Fitz Roy Traverse by Tommy Caldwell and Alex Honnold, Thamserku by the Russians Alexander Gukov and Alexei Lonchinskiy and the ascent of Hagshu by the Slovenians Aleš Česen, Luka Lindič and Marko Prezelj.  The videos were produced for the award's ceremony of the Piolets d'Or 2015. Concept & editing Vinicio Stefanello (Planetmountain.com) and Francesco Mansutti (Studio Due) for Comune di Courmayeur and Centro Servizi Courmayeur srl.


From 12th16th February 2014, Tommy Caldwell and Alex Honnold succeeded in completing the full traverse of the range, from north to south. They had to climb seven summits: Aguja Guillaumet, Aguja Mermoz, Cerro Fitz Roy, Aguja Poincenot, Aguja Rafael Juarez, Aguja Saint-Exupery and Aguja S, a total of 4,000m of ascent, a maximum grade of 7a, with ice sections at 65°. Such a traverse could only be contemplated by very fast climbers. Info


Alexander Gukov and Alexey Lonchinskii (Russia) have opened up a route on the South Face, at 1,620m. Their route, which required six bivies, has been named Shy Girl. They estimated it as grade 6a/6b (Russian grading), presenting some passages on steep ice with mixed sections M4-M5, and passages requiring artificial climbing (A2). The descent was via the South Ridge and the South-West Face in twenty-two abseils. Info


Aleš Česen, Luka Lindič and Marko Prezelj (Slovenia) opened a route on the North face of 1,350 meters high, ED, ice at 90°. The steepness and difficulty of the ice forced them to climb until two o’clock in the morning, on the first day. They summited the next day, 30th September, at 5pm, then descended by the original route, first opened in 1989 by Polish climbers. Info


The videos were produced for the award's ceremony of the Piolets d'Or 2015. Concept & editing Vinicio Stefanello (Planetmountain.com) and Francesco Mansutti (Studio Due) for Comune di Courmayeur and Centro Servizi Courmayeur srl.