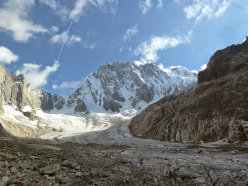 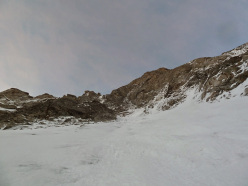 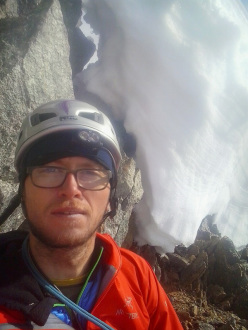 The short report by South Tyrolean alpinist Philipp Angelo who on 15 September2014 carried out what is likely to be the second solo ascent of the Polish route up the North Face of the Grandes Jorasses (Mont Blanc).

Something very particular is happening on North Face of the Grandes Jorasses. Excellent condition and the wealth of information readily found on the internet has resulted in some routes, previously considered the "holy grails" of alpinism, now have so much traffic on them that there are even queues of alpinists on them. This of course doesn't mean that the routes are easy, on the contrary, they require total attention and respect, perhaps that little bit more even. But the fact of the matter is that this September a whole number of routes have come into such perfect condition that many don't want to miss out on this opportunity. Just like 32 year-old aspiring mountain guide Philipp Angelo who on 15 September climbed the Polish route to make what is probably only the second solo of the line, after Corrado Pesce's ascent not even a fortnight ago. Angelo finished the ascent by traversing across the Jorasses, past the Canzio bivouac and along the Rochefort ridge to reach Rifugio Torino, all in a single day. "I'm exhausted, but happy, almost too tired to sleep but blissfully happy for having lived out my little dream, for having seized the day" Angelo told Planetmountain.com. It's worth noting that Pesce has just carried out another important climb that he considers "the most challenging up the Jorasses and the one that proved most satisfying." But more of that later, in the meantime enjoy Angelo's report.

15 September: It's five past four when I set off from the Leschaux hut. I'm alone and there are no lights along the glacier, only very few climbers, a team on the Colton - Macintyre, one on the Slovenian route, two on Reve Éfémère. Things start well, I get lost among the seracs in the dark. At 06:45 I start up the Polish route. The past no longer exists – seize the moment, this is the essence climbing in this style.

Twice I find myself having to downclimb to get back onto the (almost) perfect route line. In the central, steeper section the ice seems to have suffered slightly during the recent warm spell, I've got to climb carefully. At 9:50 I make a pit-stop on the ridge, at the end of the route and after 20 minutes I continue along the airy crest towards Canzio. I reach this, after various traverses, abseils and short ascents and descents, at 14:00. So far so good, I begin to feel tired but I'm still a long way away from the Torino hut.

After a brief rest I tackle the most demanding section of the ridge, two rock pitches plastered in snow, to reach the summit of Calotte de Rochefort. I've never self-belayed before on a route, now though this seems the wisest option. Perhaps not the ideal moment to try something new, but when ever is the time just right?After this a "little pitch", graded 5c, makes me lose a bit of time. I ascend this pulling on the pegs, things get a bit tense at this point. All I've got to do now is continue on, remain concentrated. I walk the final section along the glacier to the light of my headtorch and reach Rifugio Torino at 20.45. I'm exhausted, but happy, almost too tired to sleep but blissfully happy for having lived out my little dream, for having seized the day

For a full report in English check out: philippangelo.blogspot.it