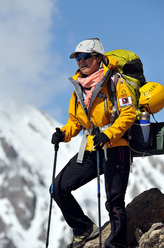 According to the South Korean journalist Im Duck Yong, Oh Eun-Sun departed from Camp 3 at 7200m and despite encountering difficult conditions reached the summit after 12 hours. She was joined on top by Spaniard Carlos Soria who at the beautiful age of 70 has now climbed his 9th 8000m peak and, coincidentally, all Pakistan 8000ers. Gasherbrum I is the 13th 8000m peak for the Korean mountaineer who is now just one step - pardon - one peak- away from completing the grand tour of the 14 highest mountains in the world.

For those who regularly follow events from the roof of the world this summit comes as no surprise, on the contrary, seeing the efforts employed in recent years it was practically taken for granted. For others though discovering that the women with the most 8000m peaks is neither Edurne Pasaban from Spain, nor Nives Meroi from Italy nor Gerlinde Kaltenbrunner from Austria, can come as quite a surprise.

In truth this surprise is more than legitiamte, since Oh Eun-Sun began her "race" to collect the highest mountains in the world just a few years ago. In 2007 she had climbed "only" five of the Himalayan giants, including Everest and K2 with supplementary oxygen. 2008 signalled a marked change in tactis, with a sprint resulting in various summits in the same season, helicopter flights from one base camp to the next to optimise times, teams employed on the mountain to prepare her ascent. The result: four summits in 2008 and another four in 2009. One can discuss about this style at length, and there can be no doubt that climbing an 8000m peak in the way Nives Meroi or Gerlinde Kaltenbrunner do is a completely different kettle of fish, but all Oh Eun-Sun needs now to complete the list is Annapurna.

Gerlinde Kaltenbrunner is currently attempting to complete this list too and at this very moment she is attempting to scale K2 which, should she be successful as everyone hopes, would be her 13th 8000er too. A few days ago the Austrian had to abandon her first attempt due to the enormous serac above the Bottleneck, but then an expert group decided to give the moutnain another shot. At the moment Gerlinde, Maxut Zhumayev, Vassiliy Pivtsov e Serguey Bogomolov are at circa 8300m in waist deep snow. So much courage truly merits the summit!