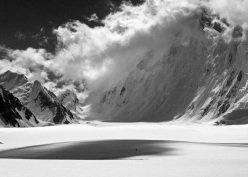 Ogre after 16 days of snow
Photo by Barmasse & Bernasconi 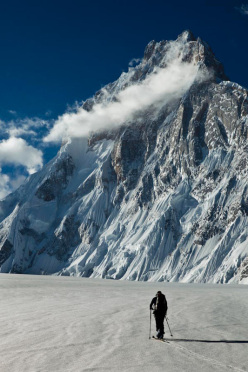 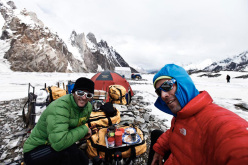 Ogre North Face, the attempt by Barmasse and Bernasconi

Hervé Barmasse talks about his failed attempt-project carried out last July together with Daniele Bernasconi up the virgin North Face of Ogre.

After five expeditions to Pakistan, where I’ve climbed untouched peaks and new routes up to 7000 m in different areas of the Karakorum, I think that there is no other place like the one I visited during my last trip. A geographical area at a Himalayan altitude, similar to the Antarctica, with weather conditions typical of Patagonia or at least they were during this latest summer experience, which can render difficult and treacherous even an apparently easy ascent.

A place where even in July and August the approach to the foot of the mountains is made only on skis and the equipment has to be dragged on a sled like in Alaska. An area which is unique to all the Karakorum and probably also to the entire Himalaya because of its particular features which, in its own name “Snow Lake”, could not find a better description.

After reaching base camp at an altitude of 4700 m, without further ado (also because Martino had already pulled out of the trip due to an intestinal infection), on 4th and 5th July we travelled up the Sing Gang Glacier equipped with skis and a sled to the north face of the Ogre, 20 km/GPS away from base camp, in order to familiarize ourselves with the possible climbing routes and start our acclimatization.

The size of this mountain is impressive together with its seracs and ledges which fringe the complex geometries like embroideries. A face which reveals some “weak points” only if you accept the risks of being constantly exposed to heavy snow and ice fall. Bearing this in mind we immediately identified a “possible line” along the north-east ridge, an ascent which would probably be not too difficult technically but undoubtedly extremely treacherous.

Once back at Base Camp, on 7th July we left again equipped with skis to continue our acclimatization on an easy 5915m peak, the first one of this expedition. After a rest day and another day of bad weather we took the opportunity to explore the beautiful Solu Towers (a future objective for anyone in search for good rock with almost no approach whatsoever) in order to optimize our acclimatization. Then we set off again with skis and sled crossing the Snow Lake northwards, to climb a mountain 15 km/GPS away from base camp, whose profile resembles a Capuchin monk. On 11th July, the following day, we made the first ascent and traverse of this peak 6330m / GPS high. An ascent with unprotectable mixed sections (also because we didn’t have adequate gear with us) and waist-deep snow both on the ridge and on the very steep slopes. In other words, should the first fall, the second would follow…

After an only nine day stay at base camp we felt acclimatized enough and suitably on form for the 7285 meters ahead, confident that the other 22 days would be more than enough to attempt an ascent. At that time though we had no way of knowing how wrong we would be! We’d return to the foot of the Ogre just once more and, unfortunately for us, just to look at the face and realize we wouldn’t be able to climb it. We simply collected all the equipment we had stashed there 28 days earlier. As often happens, we hadn’t reckoned with neither weather nor luck, two factors which always affect the outcome of any ascent, be it easy or difficult, anywhere on earth.

From 12th to 28th July it was as if winter had come back to base camp. Only two days of good weather, good for drying the moisture out of our down sleeping bags and take a break from the never-ending bad weather. During those two days we tried to play our cards with other two ascents.

On 18th July we attempted the ascent of a wonderful line of ice which we abandoned after 200mdue to the heavy snowfall and lack of ice. So we went in search for a shelter from the incessant snow and stone showers (one of which hit first my helmet. then my glasses and finally my nose).

On 22nd July, the second day of nice weather, after departing from the base camp we climbed another easy and untouched 5966m peak and also carried out its first ski descent. During this ascent, like the one on 18th July, only the Ogre was shrouded in clouds as often happens to Fitz Roy and, even more so, to Cerro Torre in Patagonia.

On 28th July the nice weather was back again and we immediately planned to reach the foot of Ogre in order to check its conditions. Everything was white and also the rock faces, though vertical, were covered with a thick blanket of snow, often even more than a meter high. With such a view, all we could do is give in as it put a clear end to our latest adventure.

Both positive and negative thoughts run through my mind. I wonder what this experience has given me and how my eyes can now see the same old glass of water… either half empty or half full? I know that it’s no good whining. Every expedition is first of all a vacation, a journey, a life experience which provides us with lots of excitement, memories and anecdotes. So, even if we weren’t successful on Baintha Brakk, the 32 days spent in one of the most unknown places of the Karakorum were a great opportunity. During the 13 days of good weather – out of a total of 32 days at base camp, we tried to acclimatize, climbing only wherever we could and devoting ourselves to record with photos and videos the images of an alpine area untouched by most. I really hope that one day this enchanted place might become a sought-after destination for many other climbers.

The end of a dream is nothing more than the beginning of a new adventure, but the memory of that day, of that particular moment when we were forced to give up, still leaves a bitter taste in my mouth. Nor did the ascent of the third unclimbed summit (reached after an exciting, treacherous climb perhaps too risky for being merely a 5850 m peak) change the flavor of an unsuccessful expedition as it failed to replace the joy we would have felt if only we had managed to attempt Ogre’s unclimbed north face.

I have to give up, accept the glass as half empty and the “meager” bounty for those, like us, who aimed to ascend Ogre’s pristine, never attempted north face.