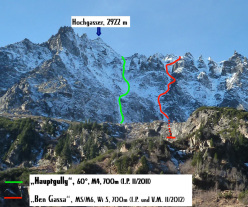 Two new routes have been established up the NW Face of Hochgasser in Austria: Ben Gassa and Wurzer Rinne.

The first new route is called Ben Gassa and was established by Poppeller and Vittorio Messini on 16/11/2012 with difficulties in the region of M5/M6, WI5, following a gully circa 50m to the right of Hauptgully.

Making the most of these excellent conditions, two days later the brothers Peter and Matthias Wurzer chose a line a few hundred metres further right to make the first ascent of their aptly named Wurzer Rinne. Just like the other routes, this finishes on the North Ridge, after having breached difficulties up to M5, WI5.

Even if these routes don't climb extreme difficulties, both require carefully snow pack assessment, as the NW Face is prone to avalanches. Autumn is therefore the best time of year for these routes.