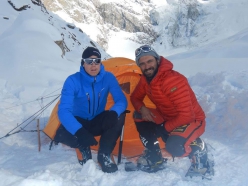 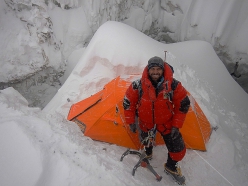 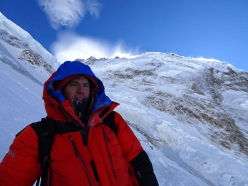 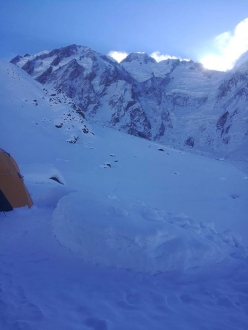 Nanga Parbat in winter, photographed from Base Camp on 27/02/2019
Photo by Daniele Nardi, Tom Ballard

Worrying news from Nanga Parbat in Pakistan where Daniele Nardi and Tom Ballard are currently attempting to climb the 8000er in winter. There has been no news from the two mountaineers since Sunday 24 February when the two were above 6000 meters on the Mummery Rib.

A tense situation is currently unfolding on the slopes of Nanga Parbat in Pakistan where Italian mountaineer Daniele Nardi and his British counterpart Tom Ballard are attempting to scale the 8126m giant in winter via the difficult, never-ending Mummery Rib on the Diamir side of the mountain.

The two alpinists had arrived at the end of December 2018 and despite heavy snowfall and adverse weather conditions had managed to install Camp 2 at 5200 meters and Camp 3 at 5700 meters at the base of the Mummery Rib, inside a crevasse. They then started the ridge proper and placed Camp 4 at circa 6200 meters. Nardi and Ballard were initially joined by two Pakistani mountaineers, Karim Hayat and Rahmat Ullah Baig, who later retired from the expedition.

On Sunday 24th February Nardi communicated via satellite phone that they had reached an altitude of about 6300 meters, but since then the ground-team has lost all contact with the two mountaineers. There has been no news therefore for almost three days, while the last GPS position dates back to 22 February.

According to a statement posted by Nardi’s team earlier today Ali Sadpara, the highly experienced Pakistani mountaineer who with Simone Moro and Alex Txikon had completed the first winter ascent of Nanga Parbat in 2016, is ready to fly from Skardu to Nanga Parbat base camp in order to scour the mountain. However, it seems that as a result of the escalating military tensions between India and Pakistan, airspace is currently closed to all flights, making any helicopter rescue mission impossible. Needless to say, without news from the two since Sunday the situation is worrying to say the least, also because the weather forecasts for the next few days appears to be bad.

42-year-old Daniele Nardi has already attempted to climb Nanga Parbat in winter on several occasions in the past. Tom Ballard on the other hand, son of famous British alpinist Alison Hargreaves, is a relative newcomer to high altitude mountaineering but he has made a name for himself by becoming the first person to climb the six great North Faces of the Alps in winter solo and in the same season.

28.02.2019
Nanga Parbat: bad weather hinders efforts to rescue Daniele Nardi and Tom Ballard
Bad weather has hampered the rescue mission operations for mountaineers Daniele Nardi and Tom Ballard, who have not been heard from since Sunday 24 February during their attempt to climb Nanga Parbat in winter. Helicopters with three Pakistani mountaineers (including Ali Sadpara) had left Skardu this morning but were forced to return due to bad weather before reaching Nanga Parbat base camp