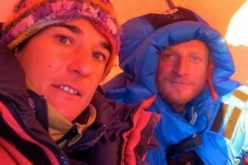 Elisabeth Revol has been rescued off Nanga Parbat by Adam Bielecki, Denis Urubko, Jarek Botor and Piotr Tomala who climbed ceaselessly throughout the night. A helicopter transported the Frenchwoman to Islamabad and she will now return to France for medical treatment, while the four mountaineers will return to their attempt at climbing K2 in winter.

It is far too early to analyse what happened during the last few days and hours high up on Nanga Parbat, and no doubt much will be written in due course. What will remain forever etched in people’s memories is the extraordinary and heroic rescue at the absolute limit of what is humanly possible, at the highest altitudes and in the coldest of winters up on Nanga Parbat, one of the most difficult and dangerous mountains in the world in summer, let alone in winter. After the alarm was raised by Revol, what will be remembered is the unbelievable, immediate Polish mobilisation, that unprecedented fundraising appeal to pay for the helicopter that might transport four of the best mountaineers in the world who, more than a hundred kilometers from Nanga, were themselves attempting a hitherto unaccomplished feat, namely to climb K2 in winter. Without thinking twice the Polish mountaineers Adam Bielecki, Jarek Botor and Piotr Tomala and the Russian nationalised Kazakh Denis Urubko offered to help, proffered to try and achieve what Bielecki himself described as "the impossible". What will be remembered are the low clouds that prevented the helicopters from lifting off, then suddenly that photo of a chopper at K2 Base Camp, followed by the flight that dropped them off on Nanga Parbat, at an altitude of 4900 meters. What will be remembered is that insane ascent, Bielecki and Urubko racing upwards through the darkness of night along the frozen Kinshofer route while Botor and Tomala prepared a Camp and then followed with more equipment. Bouts of superhuman effort in a battle against the cold, time and an incoming storm. Then, all of a sudden, the encounter with Revol who despite frostbite to hands and feet had somehow managed to descend towards them. Their rapid descent will be remembered, as will the pilot who managed to steer the helicopter back to altitude and pluck all five of them off the mountain, transporting them to Base Camp, then to Skardu and on to Islamabad for urgent medical treatment. Revol will now return to France, the other four mountaineers will set their sights on K2 again. All this happened quickly, too damned quickly, but nevertheless there was always a thought for Tomek Mackiewicz, stranded at 7200 meters in the small tent which Revol, in extremis, had managed to place him before descending down to safety. For the 43-year-old Pole rescue, unfortunately, proved impossible. Mackiewicz leaves behind a wife and three children. This was his seventh attempt at climbing Nanga Parbat in winter, it was his absolute dream and this time he finally managed to reach the mountain’s summit. What will be remembered therefore is the joy of an odyssey that ended well for the 37-year-old Frenchwoman, but also the pain, immense, for the loss of an authentic ice warrior.


"Elisabeth, nice to see you." These are the first words spoken by Denis Urubko when, together with Adam Bielecki, he finally reached Elisabeth Revol. There's no need to add anything more, to what is most certainly an extraordinary audio file.

Update at 16:32
Elisabeth Revol is flown to Islamabad and greeted by, amongst others, the French Ambassador..


Update at 16:32
One hour ago Adam Bielecki published the photo of him, Revol and Urubko on Nanga Parbat and wrote "Together with Elizabeth Revol and Denis Urubko below the face Diamir. I am tired but very happy. Thank you to all of you for warm words. I am sorry but we had no chance to help Tomek."

Update at 12:54
Beware of fraud: the Polish expedition warns the following “There are websites that pretend to be the Kukuczka Foundation, and they're collecting money for the Tomasz Mackiewicz's family. Please be advised that at the moment the Foundation does not conduct such a collection. Please be careful”. Anyone wishing to make a donation should do so at www.gofundme.com/rescue-on-nanga-parbat

Update at 12:31
Ludovic Giambiasi, Revol's partner, wrote the following: "We would like to thank very warmly all the people who have helped us in this organization and in the rescue (in the disorder and surely there are people missing!): The Polish Embassy and the French Embassy, Michel Nehmé (Consul de France in Pakistan), Masha Gordon, Daniel Nardi, Stefania Mondini, Robert Szymczak, Mauri, Agostino, Piotr Tomala, Jarek Botor Riaz ul Hassan, Yann giezendanner, the Pakistani army, General Khan, Dr. Cauchy, Dr. Ahmad Shahab, Ali Saltoro, the helicopter pilots,
and a special place and a big thought for Anu Antonina, Tomek's wife and children. A huge thank you and a deep respect to Denis URUBKO, Adam BIELECKI who have performed an outstanding performance. Thanks also to the other rescuers Jarek and Piotrek. We have a deep thought for Tomek who will remain forever engraved in the history of NangaParbat and the whole world. Ludo & Jean-Christophe"

UPDATE at 10:35: Elizabeth Revol at Base Camp!
News just in: 37-year-old French alpinist Elizabeth Revol is safe in Base Camp. After initial treatment she will be flown to Skardu and then to Islamabad for first aid.

Published at 09:42 on 28/01/2018
It’s hugely impressive, at the very limit of what is humanly possible, what the four rescuers Adam Bielecki, Denis Urubko, Jarek Botor and Piotr Tomala have been doing to aid 37-year-old Frenchwoman Elizabeth Revol. After climbing through the darkness at record speed, Adam Bielecki and Denis Urubko had located Elizabeth Revol thanks to her Spot tracker and the lights of her headlamp, and after a short rest they began the difficult descent down the Diamir Face. Absolutely nothing can be taken for granted at these altitudes but, against all odds, the "ice warriors” as they have been nicknamed achieving the seemingly impossible.While Bielecki and Urubko descended with the Revol, Botor and Tomala climbed up to help them in their descent.Two hours ago the Polish team issued a statement that all five had reached Camp 1, and that helicopters should arrive soon. There has been no news, unfortunately, of Tomek Mackiewicz.