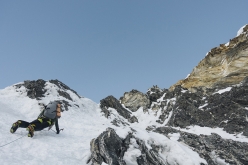 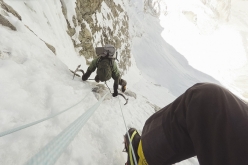 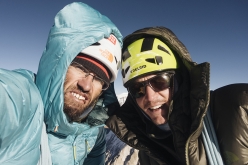 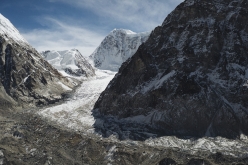 Gimmigela Chuli II - or Gimmigela East - is protected by a formidable North Face which had not been attempted previously. Having seen photos of the mountain taken from afar, Auer and Blümel travelled to Nepal in October together with Elias Holzknecht and Matteo Mocellin. A five-day hike through the jungle following River Tamar andthen past the high altitude plateaus in the Ghunsa Valley allowed them to establish base camp at circa 5200m, just east of Kanchenjunga’s classic basecamp at Pang Pema.

Blümel and Auer acclimatised on Chromo’s south ridge and after having spent three nights at 5900m they were poised for their alpine style attempt of Gimmigela East’s north face. On November 8 they made the 8-hour approach along the glacier and climbed up to 6000m, where they made their first bivy. The next day they continued climbing quickly, encountering excellent conditions along the entire 1200m high face. A second bivouac at circa 6850m proved extremely challenging due to the high winds that swept across the exposed summit ridge, but at 7:30am the next morning they successfully reached the summit. "A cold, windy but clear morning allowed us to see far into Sikkim’s great mountain range and to the unexplored east face of Kangchenjunga." After the ritual summit photos they quickly retreated via the line of ascent, returning to BC late on the 10th of November.

Auer told planetmountain.com "Conditions were simply outstanding. Normally there’s far more rock but this year, due to the large amount of rainfall the monsoon brought with it, the face was plastered in snow and ice. Our main goal was the North Face of Gimmigela East and we succeeded. We realised that there were practically no places to bivouac on the actual face, and that's why we climbed so quickly, basically bivying at the base and on the summit ridge. It was one of those expeditions where everything came together. A great project, an even greater friendship and a very efficient first ascent of a ’King Line’ on a 7000m peak in one of the most remote places in the Himalayas."