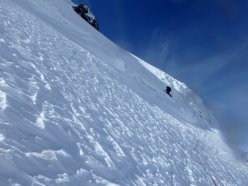 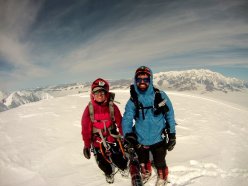 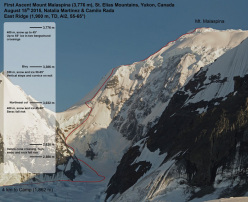 On 15 August 2015 Natalia Martinez from Argentina and Camilo Rada from Chile made the first ascent of Mount Malaspina (3,776 meters), Saint Elias Mountains, Yukon, Canada. The two climbed what was reputed to be the "highest named unclimbed mountain of North America" from the North via East col and East ridge (1900m, TD, AI2, 55-65°). The trip report by Camilo Rada.

On the 4th of August our team composed of Natalia Martinez and Camilo Rada, as part of our Uncharted Project (previously climbing Cordillera de Sarmiento in 2012, Mount Sarmiento in 2013 and Aguilera Volcano in 2014, the latter two nominated in the Piolet d'Or big list) flew into Kluane National Park and landed on the Seward Glacier close to Mount Saint Elias. After traversing 12 km we established a base camp near the base of Mount Malaspina, to our understanding attributed with the awkward title of "highest named unclimbed mountain of North America". This definition aside, it is certainly one of the most prominent and attractive unclimbed summits on the continent, possibly even the highest unclimbed, but that depends on the definition of mountain one adopts. As far as we know, it was seriously attempted only once, in 1976 by a Polish-Alaskan expedition via the west ridge.

After 3 days exploring the heavily crevassed glacier flowing from Malaspina to Seward, we finally discarded every option through the glacier and were forced to follow the dangerous edge for a short section, where avalanche debris had filled the crevasses. Crossing that section in the early morning, we established a high camp near the north face of the mountain, on August the 9th.

Due to high avalanche risk the high camp was abandoned in bad weather and never occupied again. Despite several areas of the high glacier basin close to the wall seeming safe, seracs falling 1,000m straight from the top of the north face were capable of launching ice and snow projectiles for several hundred meters across the entire area. The decision to abandon our high camp was taken after it was hit by strong winds and heavy spray from a serac avalanche, and a few TV-sized chunks of ice were found just meters away of our tent.

Once the weather improved, the summit push started from base camp on August 13th at 00:40 h. After 3 hours we reached the high camp deposit and continued towards the col between Mount Baird and Malaspina. Access to the col was extremely exposed to avalanches, rock and serac falls, so we proceeded quickly during the early hours before dawn. At 7am we started the climb towards the col, crossing diagonally below a hanging glacier, the first 300 meters of snow and ice of 45 to 60 degrees were simul-climbed, rushed by a small but nevertheless close serac fall. Two pitches of 55-65° of ice then led to the easy col slopes. After resting we resumed the climb up ramp that led to Malaspina's East shoulder, 350m higher; this very sustained slope involved 9 pitches on 50-65 degrees snow and ice with a final cornice marked by short vertical steps. Shortly after midnight we built a igloo-like bivouac shelter at the shoulder (3,377m) surrounded by the breathtaking spectacle of a Northern Lights storm.

The next day (15th) at 10 am we continued towards the summit, climbing easy snow slopes and a few technical sections to overcome a few Bergschrunds. After a false summit, we finally summited at 2 pm with the GPS reading 3,756 meters. The view was dominated by the overwhelming Malaspina Glacier, in fact the largest "Pie de mont" glacier in the world and an extremely outstanding feature in the area. This was accompanied by views to Mount Saint Elias to the West, The Logan massif to the North and Vancouver, Augusta, Cook and Fairweather to the East.

The descent followed the same line and involved 15 rappels, half of them in low clouds, winds and heavy spindrift. Base camp was reached again at 8 am on August 16th after 55 hours on the mountain. Despite the fact that the technical difficulties of the route correspond to a D/D+, we suggest the TD grading due to the remoteness and the many objective dangers on the route.