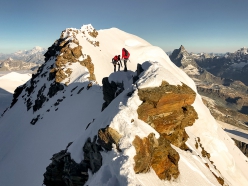 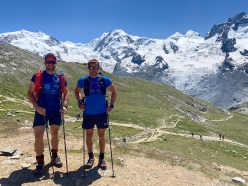 On 8 July 2020 the two Swiss mountaineers Adrian Zurbrügg and Nicolas Hojac completed the spectacular traverse of the 18 mountains in the Monte Rosa massif above 4000 meters in just 13 hours and 39 minutes.

Last week Adrian Zurbrügg and Nicolas Hojac managed to enchain the 18 peaks of the Monte Rosa massif above 4000 meters in a mere 13 hours and 39 minutes. The two Swiss mountaineers departed on Tuesday night at 23:00 from the Monte Rosa hut in order to complete the so-called "Spaghetti-Tour", but since Balmenhorn and Felikhorn are above 4000m but not included in the “official" list, the duo decided to climb these as well.   Taking advantage of te excellent conditions, Hojac and Zurbrügg climbed the first ten peaks by dawn, but feared that the daytime heat would soften the snow and slow them down considerably.

This was not the case. The alpinists progressed rapidly and made only one small mistake, during the last descent as it happens: "Our rope got stuck and unfortunately we had to cut it with a knife, otherwise we would have wasted too much time" commented the two Bernese mountaineers.   This small technical accident aside, everything ran smoothly although fatigue set in towards the end. Nevertheless the reached the top station of Klein Matterhorn at 12:30 to end their traverse. In order to complete the 29 km crossing, with almost 4,500 meters of altitude gain, they needed just 13 hours and 39 minutes.

As always there is no such thing as "official" records in the mountains but in 2015 the same route was carried out by Ueli Steck and Andreas Steindl in 14 hours and 35 minutes. "Completing this route in this time makes us very proud" explained Hojac and Zurbrügg, who in the past had climbed several of these peaks, but never the complete tour. The two point out that it is not possible to make direct comparisons with Steck and Steindl as their ascent was made during Ueli Steck's 82 Summits project, during which the Swiss alpinist certainly hadn’t recovered 100% prior to making this wonderful high altitude traverse.

15.08.2014
Monte Rosa: twenty years of research by Ferrino
The Ferrino High-lab, located at an altitude of 3585m of the Valle d'Aosta side on Monte Rosa, celebrates 20 years. It is the highest laboratory in Italy. And it is up there that the company from Turin, the market leader for mountain outdoor products (and more), tests its tents and invites all outdoor enthusiasts to enjoy a unique experience: that of a real Base Camp!
14.04.2003
New route on Roccia Nera, Monte Rosa
On 28/02/2003 the two Italian mountain guides Roberto Rossi and Ivano Bianchi opened a newline up the North Face of Roccia Nera (4075 m, Monte Rosa).