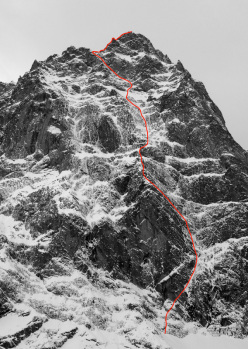 The two British mountain guides Jon Bracey and Matt Helliker kicked off the winter in style with the first ascent of a difficult new mixed line up the NE Face of Mont Rouge di Greuvetta (3477m).

The original idea had been to attempt the first repeat of Coracrazion, the route established in 1986 by Mark Charlton and John Silvester up the North Face of Mont Greuvetta, but the two immediately realised that conditions were prohibitive. The trip from their base in Chamonix to Val Ferret proved interesting nevertheless as they were struck by a beautiful face on the other side of the valley, the NE flank of Mont Rouge di Greuvetta. A 900m face which, according to all research, had never been climbed before; an irresistible challenge.

Helliker and Bracey returned 10 days later and, finding the face covered in snow, bivied on the glacial moraine to then set off early the next morning. After having negotiated the difficult access to the base of the face the two began the route proper, climbing past hard mixed up to M6. Despite excellent conditions up pristine nevé runnels progress was  initially slow, so much so that at midday they were only 1/3 of the way up the face but thankfully a providential, thin line of ice appeared and unlocked the way upwards. After numerous chimneys, more steep, thin and unprotectable ice, Helliker and Bracey finally reached the summit ridge. Two pitches later led them to the summit, from which they descended in a further seven hours via 20 abseils down the line of ascent.

According to area expert Luca Signorelli, the "shield" visible on the left-hand side of the photo contains some old routes established by Ugo Manera, but these do not reach the summit of Mont Rouge and it is possible therefore that Eyes Wide Shut is now the first route to breach the entire face. According to Bracey the route climbs excellent granite, past difficulties up to ED1, M6, AO, UIAA IV+, and is "very, very beautiful, indeed. Well worth repeating."