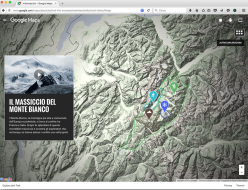 After releasing a Street View version of The Nose on El Capitan in Yosemite along with climbers Tommy Caldwell, Alex Honnold and Lynn Hill in July 2015, Google has now launched its biggest digital vertical exploration project to date: Mont Blanc.

In order to display the massif in a way it has never been seen before, the American search engine teamed up with renowned photographers and alpinists Jonathan Griffith and Renan Ozturk as well as Sender Films to capture world-class mountaineers, skiers, climbers and runners in action.

The top of the highest mountain in the Alps can be followed step-by-step via the famous Goûter Route, retraced by Corrado Korra Pesce who carried the Street View Trekker all the way to the 4810m high summit. A series of other high resolution 360-degree panoramas provide further in-depth exploration, such as Catherine Destivelle climbing up the smooth granite south face of Aiguille du Midi, Laetitia Roux and Patrick Gabarrou ascending and skiing down Arête des Bosses, Ueli Steck ice climbing on the Tacul Triangle serac shortly after sunrise and dry tooling up the south face of Pointe Lachenal, Patrick Gabarrou below the Cosmiques seracs and Kilian Jornet Burgada on the airy Aiguille Blanche de Peuterey. Other explorations are just as dramatic and include the rapid transformation of the Mer de Glace as well as other important aspects of life down in the Chamonix valley.