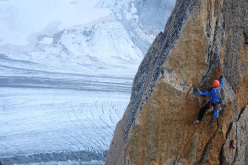 Michel Piola and his passion for new routing

The film by Yannick Boissenot called Passion d'ouverture that documents the life and climbing activity of Swiss alpinist and rock climber Michel Piola.

After having climbed for more than 30 years and made the first ascents of more than 1500 new climbs, Switzerland's Michel Piola is undoubtedly one of the most prolific alpinists in the world. But it isn't the sheer number of routes that is startling, rather, what counts above all in Piola's new climbs is the quality. Piola has established routes in almost every corner of the earth, from the great rock faces in the Alps (above all in the Mont Blanc massif) to Patagonia, Greenland, Madagascar, Morocco, Pakistan, Turkey, Greece, Sardinia, Sicily... the exhaustive list is long and perhaps not even Piola remembers them all. French film director Yannick Boissenot, with his Passion d'ouverture, renders homage to Piola and his insatiable desire for forging new routes.


22/07/2014 - Michel Piola interview: climbing on Mont Blanc, the search and the story that continues
The fabulous world of Babette, or rather Mont Blanc's marvelous granite climbing, starting from Envers des Aiguilles. Interview with Michel Piola, one of the most prolific alpinists in the world who, in more than 30 years of activity, has left an indelible mark on climbing. His routes are considered priceless, thanks to their intrinsic beauty and the style of their first ascent, above all in the Mont Blanc massif where even today the climbs are considered an important test for all generations of alpinists. In this rare interview with Maurizio Oviglia, Piola talks about his climbing and his continuous search for unclimbed lines.