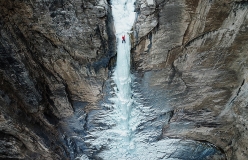 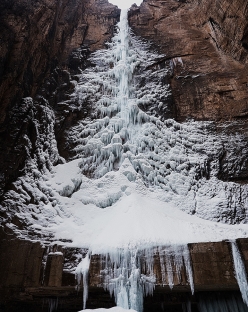 Ice climbing in China: a stunning icefall resembling a Christmas tree was first ascended on 31/01/2017 by He Chuan and Liu Yang in XianXia canyon, a branch of Linzhou Taihang canyon.

On Christmas day 2016 the picture of a stunning icefall resembling a gigantic Christmas tree spread around China’s WeChat, a popular communication tool similar to WhatsApp or messenger. The draw of this amazing line proved impossible to resist and, 40 days later, the two Chinese climbers He Chuan and Liu Yang made the routes’ first ascent. Called Merry Christmas, the 140 meter icefall breaches difficulties up to WI 6.

Climbing the line was only part of the difficulties though. Before tackling the ice, Chuan and Yang first had to locate the climb and this took them 5 days. They eventually discovered it was situated in XianXia canyon, a branch of the huge Linzhou Taihang canyon in the Taihang mountain range, west of Linzhou. The main road that led there from Beijing was closed though and when they finally arrived on January 7 together with photographer Lie Feng Got, the ice fall had already collapsed. All they could do was go home and console themselves by making the first ascent of two other drips along the 700km return journey.

A picture of the Christmas tree appeared again on WeChat one month later, on January 26. Another two Chinese climbers attempted the ice fall the next day but retreated from the first pitch due to the wet ice and huge flow of water in the gap between the rock and ice.

Chuan and Yang returned to Linzhou on January 28th nevertheless and decided to climb the icefall on the 31st of January, timing the ascent with the end of the cold weather period. The lower drip was 2m in diameter and the four-pitch line was protected with ice screws only; no bolts were added.

Speaking to planetmountain.com, Chuan explained: "I was shocked when I faced the gap and the flows behind the "window", around which there is no solid ice. I then climbed to the side of the branch, which was plastered on the rock and helps to keep the whole tree standing, and added good piece of gear. All kinds of icicles hung from above, and mushroom-like ice formations grew on the trunk and branches."

Chuan, who has spent the last three winters ice climbing in Norway and the Canadian Rockies, concluded unsurprisingly: "It is the most beautiful ice climb I know and the most fun climb I’ve ever done."