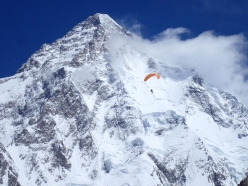 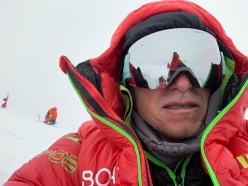 Max Berger on the summit of Broad Peak on 04/07/2019. No bottled oxygen but also no take-off from the summit.
Photo by Max Berger archive 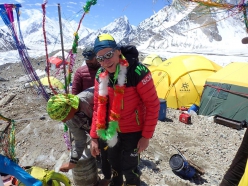 Last week Austrian mountaineer Max Berger summited Broad Peak (8047m) and then paraglided from Camp 3 at 7100 meters. He now plans to climb and fly K2, the second highest mountain in the world.

Admittedly the quality of this video isn’t the best, but the views above Concordia are outstanding. The footage was taken by Max Berger, the Austrian mountaineer who on Friday 5 July paraglided from Broad Peak’s Camp 3 at an altitude of 7100 meters after having summited the twelfth highest mountain the day before.

Berger had climbed to the summit without supplementary oxygen on the evening of 4 July after having arrived in the Karakorum just two weeks earlier. His success - the first BP summits this season - comes about after having acclimatised at home in an increasingly fashionable hypoxic tent. As conditions on the summit were not ideal the 50-year-old descend to Camp 3. The next morning he spread out his 990-gram paraglider and in less than 30 minutes drifted down to Base Camp. In doing so he cut two days off the descent.

Berger's flight is only the first phase of his ambitious project called Climb to Fly and he is now gearing up for the most fearsome mountain of all, K2. The plan is to climb to the top of the second highest mountain in the world via the Abruzzi Ridge and then descend by paraglider. In order to do so conditions must be absolutely perfect, both for the ascent and for the take off, which requires winds blowing fro the right direction and no stronger than 20 km/h. In raw numbers it’s a circa 3500m vertical drop in about half an hour. At present no one has ever succeeded in such an undertaking, but speaking with the Austrian media outlet nachrichten.at Berger stated "Nonetheless I believe my chances are not so bad. In the past there have already been summit days when a flight would have worked perfectly."