► News ► Alpinism ► Matterhorn, via Bonatti in 7 hours 14 minutes by Aufdenblatten and Lerjen-Demjen 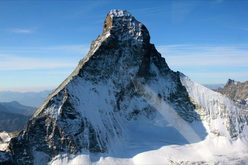 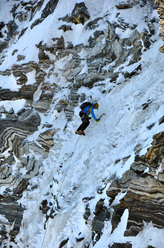 PORTFOLIO / gallery Portfolio: Matterhorn, via Bonatti in 7 hours 14 minutes by Aufdenblatten and Lerjen-Demjen

Matterhorn, via Bonatti in 7 hours 14 minutes by Aufdenblatten and Lerjen-Demjen

On 27/09/2011 the Swiss alpinists Patrick Aufdenblatten and Michael Lerjen-Demjen climbed the North Face of the Matterhorn via the Bonatti Diretissima (ED+ 1200m) in 7 hours 14 minutes.

The North Face of the Matterhorn witnessed a great, fast ascent yesterday at the hands of 23-year-old Patrick Aufdenblatten and 26-year-old Michi Lerjen-Demjen, who climbed the face in 7 hours and 14 minutes via the route established by Walter Bonatti, alone and in winter during his extraordinary and historical ordeal from 18 to 22 February 1965.

The two Swiss alpinists form a formidable team and have climbed together from Yosemite to last year's repeat up the Z'Mutt Nose via the line established by Alessandro Gogna and Leo Cerutti in 1969 right up the Matterhorn North Face. Aufdenblatten and Lerjen-Demjen reached the start of the route last Saturday but conditions were not ideal and so they opted to wait for better conditions which came just a few days later. On Monday they ascended to the Hörnlihütte and at 03:35am they set off for the Bonatti route which, an important detail, they had never climbed previously.

One hour and 5 minutes later they reached the Bergschrund, from where the first section up steep mixed terrain begins, directly beneath the Zmutt Nose. They then climbed past the Traverse of the Angels, seven diagonal pitches which thanks to ideal conditions they dispatched with easily. Three and a half hours after having left the hut they had already climbed past this section of the route and they then entered the upper half of the North Face. At this point the terrain is difficult and requires utter concentration, especially when simul-climbing as Aufdenblatten and Lerjen-Demje were. Four hours later, a mere 7 hours and 14 minutes after setting off, the Swiss reached the summit, while 10 hours after the start they were comfortably back in the Hörnli hut.

After the ascent the duo told us "Even if we're achieved a top performance, in alpinism you simply cannot compare single ascents with one another. What made us very happy though was to receive congratulations from Üeli Steck, this recognition meant a lot to us! It's clear though that we didn't have neither the same conditions, nor the same style of ascent as Ueli. It's a development of what others have done before us. Our performance will be followed by others. Not necessarily to break records, but to improve personally!"

The 1200m of the Bonatti Direttissima are graded ED+ and were repeated for the first time by Polish climbers R. Berbeka, J. Strycznski, R. Sfafirski and A. Zyzak from 12 - 13 August 1966. Although the route hasn't been abandoned altogether, it is rarely repeated. In 1994 French climber Catherine Destivelle repeated the route alone over four days, while in March 2006 Swissman Ueli Steck climbed the line in 25 hours. Last but not least, this April the Marco Farina, Arnaud Clavel and Maurizio Rossetto carried out what is believed to be the first Italian repeat.