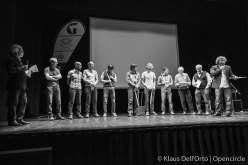 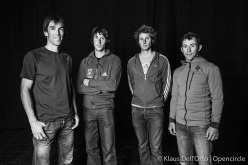 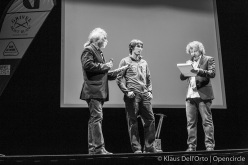 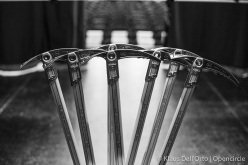 On Friday, May 22 at Lecco the Grignetta d'Oro 2015 was awarded to Matteo Della Bordella while Ivo Ferrari and Romano Benet received special mentions. The other alpinists in the running for the Italian mountaineering award were Hervé Barmasse, Simon Gietl, Tamara Lunger, Corrado Pesce, Francesco Salvaterra and Luca Schiera.

Matteo Della Bordella has won the Grignetta d'Oro 2015. The Italian mountaineering prize, celebrated in Lecco during the ‘Monti Sorgenti’ event organized by the Lecco CAI and Riccardo Cassin foundation, was awarded on Friday evening in a packed hall in Lecco. Two special mentions were awarded to Ivo Ferrari and Romano Benet.

The jury, composed of President Mario Conti, Rolando Larcher, Rossano Libera, Simone Moro, Valery Babanov and Vinicio Stefanello, selected Matteo Della Bordella "for his intense, progressive, high quality and difficult climbs, with which he has tested himself to achieve different objectives, taking his research not only on terrain that is vertical, difficult, at altitude and hence classic to mountaineering in general, but also to face other diverse elements such as the Arctic ocean, thus making his mountaineering exploratory experience broader, more mature and more complete."

The award was given to Della Bordella for the climbs he carried out during the last two years: the first ascent of West Face of Torre Egger, a new route up the West Face Uli Biaho in Pakistan’s Trango Towers massif, the repeat of the Lecco route on Grand Capucin in the Mont Blanc range, the ascent of Aguja de Sila and Cerro Fitz Roy in Patagonia, and the new route on Shark's Tooth in Greenland, approached autonomously by kayak.

"I’m really satisfied - said Della Bordella - and wish to congratulate all the others, too, because rankings have little sense in mountaineering. I want to dedicate this award to my father in particular, and to all those who have climbed with me. I hope it's a starting point for many other adventures."

"It was a difficult choice. But I'm happy with the names of these 7 climbers - said Mario Conti, jury president of the Grignetta d’Oro 2015 - we attempted to choose who we believe has a broader range of activities, who focused on research and who was motivated to going beyond simply exploring new places."

"We were happy to bring the Grignetta d’Oro back to Lecco" explained Alberto Pirovano, one of the event organisers along with the evening’s presenter Sandro Filippini "and happy that Lecco is the centre of mountaineering at the highest level, even internationally. I am happy to see that Lecco mountaineering is still cutting edge and that it is carried out by acclaimed alpinists. The jury made it’s decision in a clear manner, and the words of Valery Babanov about the award and the list of alpinists were greatly appreciated."

The other candidates were Hervé Barmasse, Luca Schiera, Corrado Pesce, Tamara Lunger, Francesco Salvaterra and Simon Gietl. All candidates were given a special ice axe by Grivel Mont Blanc, the historical mountaineering company.

"Being here in Lecco as Grivel feels like be in the lion’s den" said Betta Gobbi of Grivel. "But it’s a beautiful lions den because I see with great joy that mountaineering isn’t over and that there are still many youngsters who are still interested in this activity, who are keen to do lots and to do so at the highest standards. Alpinism is alive and kicking, long live Lecco and those who have believed in this award."

During the evening accompanied by the music from Boz Trio and guests, there were also two special mentions: to Ivo Ferrari "for his way of communicating alpinism"; and to Romano Benet, for "prooving that all obstacles can be overcome."