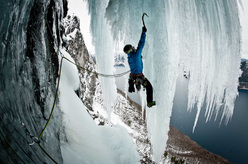 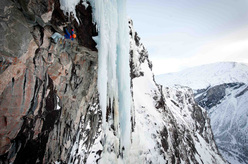 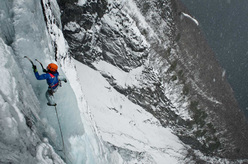 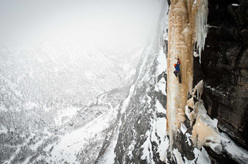 A team comprised of Ines Papert, Rudi Hauser, Lukas Seiwald, Kurt Astner, Emanuele Ciullo, Thomas Senf and Scott Milton has just returned from the Romsdalen region in Norway where they repeated a series of routes and made the first ascents of a number of important new ice climbs.

In 2010 Austrian climber Rudi Hauser travelled to the west coast of Norway, just a few hours from Trondheim, and discovered steep valleys and gigantic rock faces which although well-known amongst base jumpers, are less renowned for their ice and mixed potential. Acting on this initial recce Hauser returned in February 2012 along with Ines Papert, Lukas Seiwald, Kurt Astner, Emanuele Ciullo, Thomas Senf and Scott Milton and the team, based in the Sunndalenfjord, scoped the climbing in the Sunndalen, Amotan, Eikesdal, Eresfjord and Trollveggen areas. Unsurprisingly, they came away with a series of important first ascents and repeats. Papert's trip report is published below.


Surprice (WI6+/M8, 350m)
On day 1 our photographer Thomas Senf and I set off in perfect conditions at around 0° to climb our first route in the Litldalen/Sunndalen area. Our goal was to climb a massive ice dagger which could be reached after 300 meters of climbing. When we got there I started up the steep mixed pitch equipped with a full rack, the rock provided perfect placements and I placed my last piece of pro on a thin ice smear just beneath the gigantic dagger. I leaned out carefully, delicately placed my first axe into the dagger, then the second and carefully cut loose. Suddenly though the dagger tore beneath my tools, tons of ice tumbled down into the void below. I was dangling in space, but held my nerve and swung back to reach the rock and smear. My first thought: hopefully Thomas was safe enough beneath the overhang. I shouted down and he gave me the thumbs up. We'd been lucky. We were shaken, but nevertheless we wanted to complete the route. The dangerous dagger was no more, but this had given way to a powerful ice roof which I fought hard to overcome. Thomas then led the last pitch. We'd done it!

Quattro Naziones (WI 6/M9/A1, 500m)
We discovered a huge ice gully at the end of the Eikesdal Valley with a mixed variation finish. Lukas Seiwald, Thomas Senf, Emanuele Ciullo and I climbed 400m up easy terrain before things got serious: a 40m pitch up steep granite to finish via the final dagger... Lukas belayed me with tons of patience: steep granite, poor gear and hard technical climbing made this pitch a real challenge. Halfway up I had to place a bolt by hand to avoid a potential fall onto a ledge and the climbing remained challenging right up to the very end. I was exhausted when I reached the top, a redpoint ascent was simply out of the question and we planed to return in the next couple of days. Unfortunately though the weather took a turn for the worse, a huge snowstorm arrived and the ensuing avalanche danger forced us to abandon hopes. A free ascent is something to aim for in the future.

Sea Gull Jonathan WI 6 and Offshore (WI 7, 250m)
One of the absolute highlights of our Norway visit was a boat trip from Eidsvag across the Eresfjord to reach the face on the other shore. Lukas, Scott and I made the first ascent of "Sea Gull Jonathan" in a truly exposed position high above the fjord, while Rudl, Kurt and Thomas established "Off Shore". Two parallel running, 250m high climbs up demanding ice, never climbed previously. What a great experience!

50$ King Crab (WI6/M10, 350m)
Neither Thomas Senf nor I had ever climbed such strangely coloured ice before. The dagger reminded us of legs of King crabs, the ones Rudi had cooked for us the day before. Despite this massive protein intake my mental strength was almost spent, and since the rock accepted little natural gear I protected our 50$ King Crab with 5 bolts. We returned the next day and I managed to send: the crux was a massive span which shook me off a couple of times before I was successful. The remaining ice to the top was some of the finest I've ever climbed and this is certainly one of our best routes ever.

Perly on Ice (WI6/ M9 70m Trad)
Our last day offered warm temperatures and lots of snow, but conditions were still good enough to try a new route. A crack in the roof was the line we wanted to climb: a magic line protected with trad gear which luckily held my long falls. Thanks to Thomas' motivation I managed to redpoint the line just before our departure. We named it after our "foster mother" Perly, who provided us with everything and made our trip an unforgettable experience.

Thanks to all team members and of course Rudi Hauser who made this all happen.