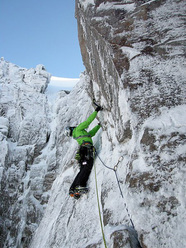 On 19/02/2010 Ines Papert and Ian Parnell made the first ascent of Little Nipper (60m, VI,8) a short new route up the Far East Wall of Beinn Eighe, Scotland.

Papert had travelled north together with Audrey Gariepy and Mathieu Audibert from Canada to spend a week getting to grips with some of Scotland's finest routes, and although Parnell doesn't rate the route as particularly significant, it goes to show just how quickly Papert adapted to the infamous Scottish winter climbing.

In fact, Parnell states "Much more impressive were her repeats of "Unicorn" and "Blood Sweat and Frozen Tears", both grade VIIIs. As far as I know these are the first grade VIIIs led by a woman in Scotland. I thought she climbed superbly: Scottish climbing is unique and it takes most people several visits to get used to the difficult conditions, long walk ins and often serious traditionally protected routes. Ines picked it up immediately and managed some outstanding leads." The visiting team's climbs are listed below.