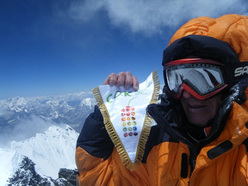 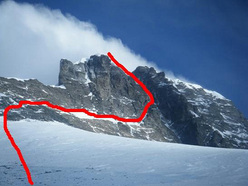 On 16/05/2010 the Kazakh mountaineer Denis Urubko reached the summit of Lhotse via a new variation from the South Col.

Often when mountaineers achieve this goal they give themselves a break, they shift their interests and efforts towards other horizons, but the 36 year old Karakh alpinist has shown no signs whatsoever in abandoning the Himalayan giants. Quite the opposite, and on 16 May Urubko managed to summit Lhotse, a peak he'd already climbed in 2001 along the normal route, ascended this time alone and via a new variant from the South Col.

Italian mountaineer Simone Moro has confirmed the ascent on his website: "This morning Denis came back to base camp. He was happy and tired for the nice climb he did on Lhotse along a new route/variation. Starting from south col, yesterday at 6:30, arrived first of the season at 11,30 on the Lhotse summit at 11,30. He followed the line we studied together some weeks ago. Well done Denis."

Moro is currently in Everest Base Camp because the initial aim had been to explore the possibility of forging a new line without supplementary oxygen together with Urubko, but fever, the co-ordination of a helicopter evacuation of Serguey Duganov (who died this year at 7800 while descending the S Face of Everest) and Gianni Goltz (who perished at circa 8500m last year during the making of the documentary "Sherpas - The True Heroes of Mount Everest" and the extremely strong winds wisely convinced the Italian climber to bide his time and wait for his right day. He commented his decision not to accompany his friend as follows: "Perhaps it's because I've climbed Everest 3 times or Lhotse twice, but I'm not blindly attracted to the summits when the weather isn't sufficiently good. Put it down to wisdom, old age, the infatuation of 43 expeditions and some important achievements, but I want to continue to use my brain instead of being driven by my ego."

Moro's aim is to attempt Everest without supplementary oxygen. The next good weather window is expected to be around 23 May.