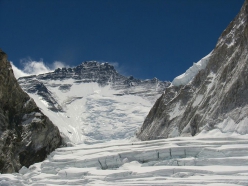 Lhotse seen from the Western Cwm, also known as the Valley of Silence
Photo by Nicola Bonaiti

The Americans Hilaree Nelson and Jim Morrison have carried out the first integral ski descent of Lhotse (8516m) in the Himalaya, skiing directly off the summit down to Camp 2 at 6400 meters.

After the historic first ski descent of K2 carried out in July by Andrzej Bargiel, at 2:22 on 30 September the Americans Hilaree Nelson and Jim Morrison added another chapter to the rich history of extreme skiing at the highest altitudes by becoming the first to ski directly off the summit of Lhotse, the fourth highest mountain in the world.

Nelson and Morrison had opted for the post monsoon season as this gave them a better chance of more snow for skiing. After reaching the summit - having used supplementary oxygen from 8300m circa - the duo descended the Lhotse Couloir down the west face all the way to Camp 2, requiring 17 hours in total.

According to The Himalayan Times, the two reached the summit with Dutch Simpson, Nicholas Kalis, Ila Nuru Sherpa and Fu Tashi Sherpa, while the route to the summit was fixed the evening before by Urken Lendu Sherpa and Palden Namge Sherpa. The expedition was the only team operating on Everest and Lhotse from the south this seaons, meaning that they had to prepare the entire route themselves.

Naturally the comments were extremely positive. Posting on Instagram, Morrison explained: "We did it! Ski tips about to make the first turn ever off the summit of #lhotse. Almost 28’000’ the summit was sugar snow and extra steep. An few careful turns and a hop got me into the couloir to complete a dream I’ve been working towards for a lifetime."

Nelson, who in 2012 failed to ski Lhotse as conditions were too dry, stated "I’m still absorbing the whole last month but, without a doubt, this was one of the highlights of my 20 year ski mountaineering career."

Just a quick post to say my last post was from a while ago- right as our fated internet machine imploded. Flash forward to 3 days ago: @jimwmorrison making turns through the choke of the #Lhotsecouloir. Elevation over 27,000 feet. With Everest in the background on right side of photo. I’m still absorbing the whole last month but, without a doubt, this was one of the highlights of my 20 year ski mountaineering career. Thanks to everyone who helped us make this happen! For sure more story to come soon! Need a beer first @thenorthface @clifbar @msr_gear @julbo_eyewear @adventuremedicalkits @blackdiamond @timstraumabalm @nickkalisz @dutchsimpson #lhotseski2018 @scottmellin