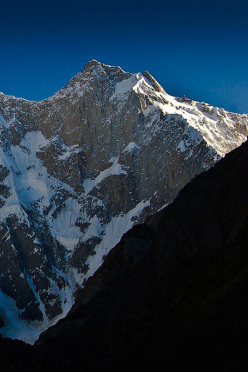 These are intense days in the Karakoram. After the great new route put up by Matteo Della Bordella, Luca Schiera and Silvan Schüpbach on Uli Biaho, this week's other big news from the Karakorum is the first ascent of Kunyang Chhish East climbed by Swiss Simon Anthamatten and Austria's Hansjörg Auer and Matthias Auer. On 18 July the young trio reached the summit of what had come to be known as "one of the great remaining problems in the Karakoram."

Located in the Hispar Muztagh massif, Kunyang Chhish East is a formidable challenge circa 7400m high, protected by a difficult and beautiful South West Face that had only been attempted by a handful of expeditions in the past, most notably by the Americans Steve House and Vince Anderson who in 2006 were forced to turn back circa 300m below the summit.

"It's been an awesome expedition with many ups and downs" Hansjörg told planetmountain just a few minutes ago. Writing from Islamabad prior to their return to Europe, he added "In the end, on 18 July at 12:30 we reached the top of the virgin KC East having climbed 2700m up the SW Face. For Simon and me this was our third attempt, while Matthias didn't take part in the first two attempts due to acclimatisation problems and injury."

At present there are no other details to go - the three obviously intended climb alpine style - and their recent success certainly couldn't be taken for granted, not only due to the objective difficulties of the face combined with the altitude, but also because Matthias injured his thumb shortly before departure and was forced to join the others later. For this reason Matthias didn't acclimatise with the others on Ice Cake Peak (6400m) and didn't take part in the first two attempts, which resulted in Simon and Hansjörg climbing to just below the summit ridge at circa 7000m before being forced to turn back because of poor weather.

We will provide more details as soon as possible about this ascent that has all the hallmarks of being very important indeed.