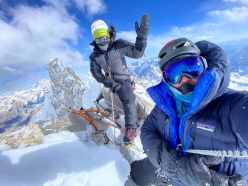 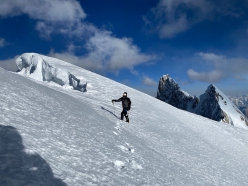 Priti Wright with K6 West on the left, K6 Main in the middle and K6 Central on the right
Photo by archive Priti Wright, Jeff Wright 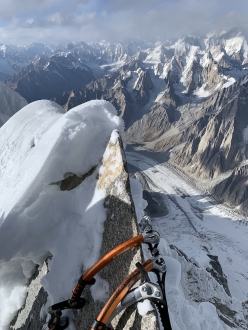 View from the summit of K6 Central over the Charakusa glacier. The mountain was first climbed by Priti Wright and Jeff Wright on 09/10/2020
Photo by archive Priti Wright, Jeff Wright 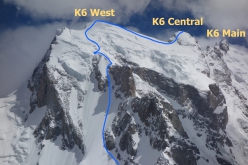 The summit ridge of K6 West, Central and Main and the line climbed by Priti Wright and Jeff Wright in October 2020
Photo by archive Priti Wright, Jeff Wright

American alpinists Priti and Jeff Wright made the first ascent of K6 Central (7,155m) in the Karakorum in Pakistan on 9 October 2020, a day after making the third ascent of K6 West (7140m). The Wright’s report about their impressive alpine style ascent that required 8 nights and nine days on the mountain

American climbers Priti and Jeff Wright have pulled off an astounding double ascent in Pakistan’s Karakorum, where on 8 October the duo made only the third ascent of the highly technical K6 West (7,140m) before traversing across to make the coveted first ascent of K6 Central (7,155m) the next day. The husband and wife team spent 8 nights and 9 days on the mountain from Advanced Base Camp on the East Nangmah Glacier, forging a 2000m route past 80° ice/snow.

The Wright’s impressive success on K6 should be viewed in its wider context. 32-year-old Priti is a software developer while 33-year-old Jeff is an aeronautical engineer. Until this year their alpine pursuits were always relegated to weekends and vacations, during which they amassed an impressive resume that included two ascents of Denali in Alaska and Fitz Roy in Patagonia via the Franco-Argentina route.

Wishing to take things further, after two years of careful planing they decided to take a Sabbatical year off in 2020. This began in earnest in February 2020 with an ascent Cerro Torre via the Ragni Route, after which they climbed the classic six north faces of the Alps: the Eiger in Switzerland in March via the 1938 Heckmair route, Petit Dru in May, the Matterhorn in June via the Schmid route, and in July Cima Grande in the Dolomites via the Comici-Dimai Route, the Grandes Jorasses via the Walker Spur and Piz Badile via the Cassin Route. K6 marks their excellent Himalayan debut and is the highest they have climbed to date. Their full report is published below.

We climbed K6 West (third ascent 7,140m) and K6 Central (first ascent 7,155m) this October. We summited West on Oct 8th and Central on Oct 9th. We had been planning to climb K6 from the Nangmah valley side for over two years.  When COVID struck, we held on to the hope of going but delayed our trip from the original June-August until late September-October when the country announced they were allowing tourists to enter with a valid COVID test. A week before we departed, Colin Haley decided to join our trip to climb various objectives solo.  Colin has been a hero to us, and was a major inspiration for us to start Alpine Climbing over six years ago.  In fact, we modeled our Sabbatical Year on a typical year in Colin's life (Patagonia - Chamonix - Pakistan).  It was a real treat for us to have him join us at Base Camp, and he provided us with a wealth of knowledge and advice in this new game (for us) of high altitude Alpinism.

This was a difficult year for climbers, world-wide, due to COVID. Nearly all serious expeditions canceled their plans, so when we continued with our planned Karakoram expedition to K6, we were quite alone in the whole range.  Certainly no one expected us to make a first ascent of K6 Central, a 7,000m peak, in late season.

K6 has three major summits along its summit ridge: West (7,140m), Central (7,155m), and Main (7,281m).  K6 Main was first climbed by an Austrian Expedition in 1970 led by Eduard Koblmueller.  Before the expedition, we were lucky enough to get in contact with one of the original expedition members of the young Austrian team, Fred Pressl, who graciously shared pictures and stories from his 1970 expedition.  In 2013, Ian Welsted and Raphael Slawinski became the first ascensionists of K6 West via a highly technical route from the North (Charakusa) side (for which they won a Piolet d'Or). Then in 2015, Graham Zimmerman and Scott Bennett became the second ascensionists of K6 West from the South (Nangmah) side. But an impending storm forced them to retreat without continuing the traverse to K6 Central, and it remained unclimbed.

The first hurdle to overcome was getting to Pakistan.  We kept in contact with Ali Saltoro, our expedition tour operator, who kept us informed on the COVID status there. We delayed our trip a month and a half, but when he told us that tourism had opened up in Pakistan, we dusted off our Visas from December 2019, bought plane tickets and got the fresh COVID tests required for entry. We had heard of no expeditions traveling this season, and we didn't know what to expect. We arrived in Islamabad on August 23rd, Ali met us at the airport, and hours later we flew to Skardu, without even leaving the airport. We arrived smoothly and safely at basecamp in the Nangmah valley on Aug 26th, with zero hassle.

Once we got to basecamp, we started acclimatizing on nearby Kapura Peak and had a full view of K6's SW Ridge and West Face from what's called Alam's Col (a route first climbed by Portugese Daniela Teixeira and Paulo Roxo in 2013).  From this vantage point, we could see that there were several options for climbing the West Face.  After acclimatizing on Kapura Peak (no summit attempt) located on the West Nangmah Glacier, we moved over to the East Nangmah Glacier and made an Advanced Base Camp.  We continued acclimatizing, exploring two of the three alternative lines that would bypass nearly all of the technical mixed climbing found by Graham and Steve.  We climbed up to 6200m and slept above 5700m for 5 nights, before determining that Graham and Scott's descent line would be the ideal line of ascent as well.

We descended back to Base Camp (4,400m), upon learning that Colin had fallen ill. Colin ended his trip and returned to France, but we made plans for a summit attempt when we received a promising weather forecast. We were well acclimatized, and poised for attack, despite the dropping temperatures and rapidly shortening days.

On October 2nd, we headed back up to ABC at 5,150m. From there, the route starts on a major ramp on the southwest flank of the peak, following up to 60 degrees ice/snow to the SW ridge for about 600m.  We then traversed for 300m across the West Face, across the bergschrund, then straight up the icy 900m West Face.  When Graham and Scott descended by this line in 2015, they made 19 Abolokov's to get below the bergschrund.  The 900m ascent of the West Face was a strenuous, calf-burning, 12hr day to reach 6,600m on the southwest ridge.  The West Face consisted primarily of a few inches of névé over solid, very hard ice (~70deg for 900m), which we simul-climbed.

The upper slopes consisted of deep snow, and we wallowed the last 400m to the summit ridge at 7,000m. Our weather forecaster warned us that we would encounter the jet stream above 6,500m with sustained winds of at least 45km/hr and a morning low of -21C; he was correct.  This late season ascent meant climbing in cold, clear, windy weather, and especially short days and cold, long nights.  We climbed new terrain along the traverse from K6 West to K6 Central.  The West Face of K6 Central was up to 80 deg ice/snow including a bergschrund and a tenuous cornice to overcome.

The North side of the sharp, rocky summit ridge of K6 Central precipitously dropped dead vertically into the Charakusa Valley.  When we finally reached the highest point of the fan-shaped crest of K6 Central's summit, we sat on the knife-edge ridge with one leg over the Lachit Valley and one leg over the Charakusa Valley. Strangely, climbing an unclimbed peak did not feel any different from climbing any other peak.  However the clear weather gave us great views of the enormous 7,000 and 8,000 meter peaks that spread out around us in a vast panorama in all directions, and we felt exuberant and humbled. But our elation was short-lived because we had a long way to descend.

We owe many thanks to Steve Swenson, Graham Zimmerman, and Ian Welsted for their helpful beta, to Colin Haley for his great advice and wonderful company, to the rest of our base camp crew, Ishaq our basecamp manager, Azhar our cook, Captain Zohaib our liaison officer, and of course Ali Saltoro, our expedition tour operator. We couldn't have done it without them!