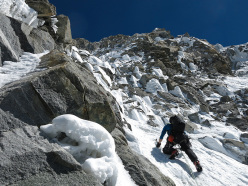 The video of the first ascent of K6 West (7040m) in the Karakorum, Pakistan, climbed in July 2013 by the Canadians Raphael Slawinski and Ian Welsted.

The ascent netted them the Piolets d’Or 2014 together with Ueli Steck: we're obviously talking about Raphael Slawinski and Ian Welsted who in July 2013 climbed the virgin K6 West summit in the Pakistan's Charakusa valley, a mountain that became known as "one of the last great problems in the Karakorum." The ascent by Slawinsky and Welsted culminated in the 7040m high summit, but before departure the alpinists had to deal with the sted had to deal with the unbelievabel and tragic terrorist attack at Nanga Parbat base camp.