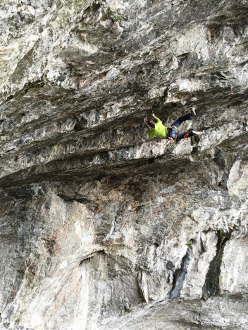 On December 28, 2014 at the drytooling crag Bus del Quai, Iseo, French climber Jeff Mercier made the first ascent of Low G Man, a combination of three existing drytooling routes. Graded D14 this is now the hardest total dry climb in the country. The report by Matteo Rivadossi.

French ace Jeff Merçier had a startling weekend just after Christmas when, on Saturday 27 December at the Iseo cave, he made the second ascent of Kamasutra D13+. He did so after having just checked out the moves once and, importantly, in a clean style, i.e. without Yaniros! Merçier believes the grade of the route freed by Angelika Rainer in January 2014, if climbed without using the classic "Figure 4" (widely used in competitions), could even be D14-.

On the 28th, after several attempts, Merçier pulled off the incredible first ascent of Low G Man, a combination of three routes: starting up Ermafrodito (the classic D7+ traverse) it continuous into Megaroof (a tremendous D12+ pitch freed by Evgeny Krivoshetsev in 2011 and repeated by Matteo Rivadossi only in 2013) to then finish up the second part of Kamasutra (D13+). For this monstrous 45-metre marathon Merçier suggests, for the first time in Italy, the superlative grade D14: if this stands, Low G Man is the hardest total dry route in the country!

It's important to underline that once again Merçier climbed without making any Figure of Four moves, opting instead for the more physical and natural DTS (Dry Tooling Style) climbing style he believes is more ethical and which he promotes internationally.

It's great to know that in out backyard behind Brescia there's a crag that is visited by many international athletes, both strong as humble. And it's great that you can go there on a Sunday and any witness something amazing, a real pleasure and a incentive for all of us "mere humans" to do better and to train harder.