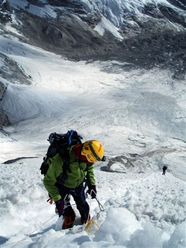 At the end of December a Japanese expedition led by Osamu Tanabe managed to climb the south Fasce of Lhotse (8516m) in winter, but turned back 40m short of the summit.

Many expeditions are in the process of setting off for the new spring Himalayan season, but we wanted to briefly concentrate on a winter ascent which terminated circa 40m short of the summit of the famous South Face of Lhotse. At the end of December a Japanese expedition managed to climb to immense south face but was forced to abandon the summit attempt just 40m short of the top due to the lateness of the hour. According to Alpinist, this is the first winter ascent of the grandiose face of the fourth highest mountain in the world.

The Japanese team, led by 45 year old Osamu Tanabe, had attempted the S Face twice previously: in 2001 they reached 7600m before being forced back by a storm, and in 2003 they climbed up to 8250m only to be halted once again by the gale force winds. This year things weren't much different, with high winds and fresh snowfall almost every day. Nevertheless Tanabe, Takahiro Yamaguchi and Sherpa Pemba Chorten reached the summit crest at 15.30 on 27 December. They continued upwards but shortly after 16.00 they opted to retreat to safety, just 40m short of the summit...

Osamu Tanabe is considered one of Japan’s most experienced Hiimalayan mountaineers, with seven 8000m peaks to his name, including k2 via the W ridge in October 1997 and Everest in December 1993.

Lhotse has been climbed in winter just once, by none other than Krzysztof Wielicki who on 31/12/1988 climb the normal route up the W Face solo.