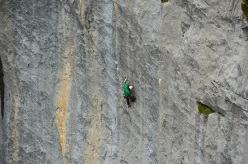 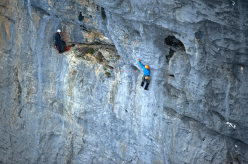 Infinite Jest, the Wenden film by the Ragni di Lecco

The film by the Ragni di Lecco which documents the climbing at Wenden, Switzerland. An homage to the beauty and the climbing on this legendary alpine face.

The film celebrates the greatness and the beauty of Wendestocke and its climbing history by analysing three routes established between 2005-2011 by the Ragni di Lecco: Portami Via, Coelophysis, Infinite Jest. It' a film which acts as a tribute to these fantastic lines, where you can rediscover the meaning and grandeur of these legendary alpine faces.

The film required 8 days of shooting on the face by by Riky Felderer and Pietro Bagnara and was directed by Matteo Modugno of Flying channel. Apart from Fabio Palma and Matteo Della Bordella, the following were involved in making the first ascents of these three routes: Adriano Carnati, Paolo Spreafico, Silvano Arrigoni, Bernardo Rivadossi and Luca Schiera. Furthermore, the soundtrack was composed by Simone Morandotti and Mike Guzzo.