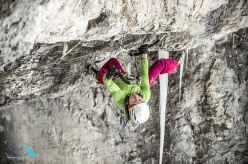 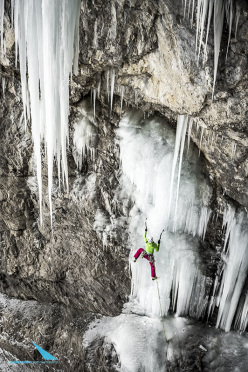 On 26/01/2015 Ines Papert repeated of the extremely difficult mixed winter climb "Ritter der Kokosnuss" (M12, WI5) located high up on the Breitwangflue at Kandersteg in Switzerland.

Banking on the physical and psychological support of Rachel Schelb and Thomas Senf, the former Ice Climbing World Champion Ines Papert managed to repeat Ritter der Kokosnuss on her second attempt. The first ascent was carried out by Germany’s Robert Jasper in 2013 while Slovenia's Dejan Koren repeated the route onsight on 28/02/2014. Ritter der Kokusnuss is protected with ice screws, pegs and nuts and friends only.

For two years I dreamt about repeating this incredibly steep line. Robert Jasper recounted his experience of the first ascent in Hans Hornberger’s short film, awe-inspiring words such as "brittle rock" and "poor protection" made me respect the line but also aroused my curiosity about the mammoth daggers that plunged threateningly down from the steep overhang.

Finally I received the long awaited phone call from Rachel Schelb and Thomas Senf in Switzerland: conditions in the Breitwangflue were not ideal, but good enough for a first attempt. In order to stop being haunted by thoughts of this climb I decided to make my way to Kandersteg.

On the morning of 23 January 2015 Rachel Schelb and I stood below the gigantic roof to start inching my way up this psychotically demanding test. As I made my way up the first M9 pitch I suddenly broke a hold and fell painfully against one of the frozen drips below. The ice broke, my back thankfully did not! I climbed on to the belay and then tackled the next M12 pitch before abandoning my first attempt. But my mind was already set: I’d be back soon!

Two days of rest helped ease the pain of my injured ribs and so on 26 January we returned, this time together with photographer Thomas Senf. The mood was extremely relaxed and during the approach we kept on cracking jokes and, despite being loaded down with Thomas’ camera gear, we even tried to break our approach record - the times are best not mentioned at this point! We were in such high spirits that there was no room for fears or doubts, and highly motivated by the other two I started up the route.

I climbed the first M9 pitch without falling, just like the second M12 pitch through the jutting roof. For the next M9 I had to rely fully on my onsight skills: my feet skidded off the holds as I cut loose, floating on poor hooks, suspended for seconds above the void, my power almost coming to an end. But then, thanks to pure grit and determination, I powered through the overhang and managed to reach a thin smear just above the lip. A few delicate moves followed, then all of a sudden I was engulfed in a shower of cold snow and ice. But this made no difference, I’d done it, was safe and felt amazing! Rachel and Thomas shouted up words of praise and were just as happy as I was! In moments like these, it’s nice to know that you’re with good friends!

We celebrated my succes with Swiss friend Mary Ebneter later that evening. An excellent dinner was accompanied by plenty of snuff and whisky. The latter should be a good training for my upcoming trip to Scotland… There, on 21 February during the "Fort William Mountain Festival”, I’ll hold a lecture and of course - go climbing!

Huge props to Robert Jasper for this incredibly fantastic route and the hard work involved in establishing it. I believe the technical difficulty he suggested is correct, even if I myself didn’t find the protection to be all too bad. In any case, ”Ritter der Kokosnuss" provides a real challenge.