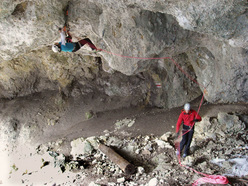 Yesterday we mentioned that Ines Papert was heading off to Iceland to discover the island's potential together with Albert Leichtfried, Markus Bendler and Audrey Gariepy. What we didn't know was that, in preparation for this expedition, Ines had sent "Law and Order", Markus Bendler's M13 at the DiebsÃ¶fen in Austria.

This is the first-ever female M13 and Ines made a spurless, and iceless, ascent of the 40m line (which overhangs for 30m) on the 9th of February. The route rates as one of Europe's hardest and had been repeated by Harald Berger in December and Mauro Bubu Bole at the start of February.