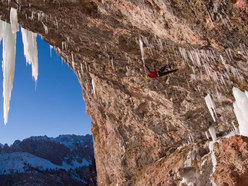 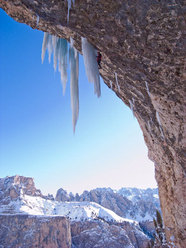 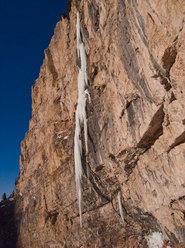 Second repeat of “Illuminati” M11 WI6+ of the super multi-pitch mixed route in Vallunga (Val Gardena, Dolomites) at the hands of Erik Svab from Italy and Klemen Premrl from Slovenia.

The five pitches of “Illuminati”, the beautiful and delicate mixed route in Vallunga (Val Gardena, Dolomites) graded M11 WI6+ has now been repeated for the second time. First ascended by Albert Leichtfried on a raid from Austria on 24 January 2006, Illuminati was first repeated this winter by locals Florian Riegler and Herbert Klammer.

Last weekend Klemen Premrl from Slovenia and Erik Svab from Italy managed to seize the day on what is considered to be one of the hardest mixed multi-pitches in the world. According to Svab, who a year ago carried out the first spurless repeat of Jedi Master in Val d’Aosta (another top ranking multi-pitch mixed route), Illuminati is “probably the hardest of its kind, not only in the Alps but worldwide”

According to Premrl and Svab the single pitches weigh in at M11, M10+, M8 WI5, WI6+. The duo attempted the first three pitches prior to their successful repeat last weekend, which was carried out with a single 70m rope and a 60m half rope for the abseils. They quite rightly underline that Illuminati must be climbed with the right physiological and physical preparation and during long periods of intense cold. The icefall faces south and the hanging drip therefore receives the sun all day long. He who has ears to hear, let him hear.


Illuminated... by the sun
by Erik Svab
“This winter seemed unfortunate, first because useless misunderstandings meant that I didn’t train as I had wanted to in our cave in Trieste, then on a sledge with my two children I cracked a rib and two months on it’s still uncomfortable. Not to mention work problems which stop me from training regularly… Nevertheless I’ve managed to repeat this second extreme mixed multi-pitch.

On our first outing we wandered aimlessly through the for 6 hours only to get within 100 m of the base of the route without even realising we were there (we found this out afterwards). On our second outing Klemen and I attempted the first three pitches and we managed to climb the first second go, and I only just failed to flash the second pitch. We spent an entire week praying for Saint Cold to keep the drips stuck and returned the next weekend to climb the route (probably the last weekend possible this season).

The weather was perfect, intense cold in the morning (-12°C) followed by sun and crisp conditions. We warmed up on the first pitch then we both led the first two pitches clean thanks to our third friend Uros Saksida who patiently belayed us. The first pitch is physica, intense and requires stamina, M11 is about right. The second pitch has a hard physical start, then transforms into pure stamina to the belay, we reckon about M10+.

The rock is often delicate or even choss so you’ve got to be extremely careful not to break a hold and fall. The third pitch is an easier traverse to reach the enormous, impressive hanging drip which is over 20m long and leads the way out of the enormous overhang. Illuminati is a true mixed route with ice on all pitches. The final drip was broken at the top and above it we came across another roof which formed due to ice collapsing in the heat. With experience and strong nerves we cleaned the ice, breaking the small chandeliers and after an hour’s fight we reached the top.

The route is definitely our hardest mixed route ever, harder and more continuous than jedi Master and probably the hardest of its kind, not only in the Alps but worldwide. Climbing it on our second attempt was highly satisfying, even if I paid the price: on the final ice section a block of ice hit my chin. Four stitches and I’m set for the next adventure! In the end we didn’t even get wet, all you need is a nice Montura jacket ;-)”