► News ► Alpinism ► Illuminati and Law and Order, repeats by Hrozova and Matejec 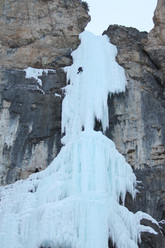 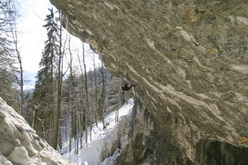 PORTFOLIO / gallery Portfolio: Illuminati and Law and Order, repeats by Hrozova and Matejec

Illuminati and Law and Order, repeats by Hrozova and Matejec

The 2012 winter season is one to remember for Czech climber Lucie Hrozová who not only placed 4th in the Ice climbing World Cup 2012, but also found the time to repeat the route Illuminati. As many will remember, this difficult mixed route in Val Lunga in the Italian Dolomites was established by Albert Leichtfried and received its first female ascent by Ines Papert and Lisi Steurer.

Hrozová climbed the route in two stages: on 19 February the Czech champion climbed the first two dry-tooling pitches on-sight  (M11- and M11+ respectively) together with a Mirek Matějc and Paľo Rajčan, and then on 20 February she seconded the first two pitches, then took over the lead and on-sighted the ensuing M8 and WI6+. Due to the terrible ice Hrozová finished late in the day, while her climbing partner Matějec completed the final pitch in the dark.

Evidently  Hrozová is on top form and this ascent proves that the individual pitches can be on-sighted, all that remains now is to take things to their logical conclusion: a single-day on-sight by one climber only. But this challenge will have to wait, the temperatures now are simply too high in the Dolomites.

Before finishing, it's worth noting that the other day Matějc repeated Law and Order, the ultra-overhanging route established by Markus Bendler at the Diebsöfen crag beneath the Wilder Kaier in Austria. This M13 had been repeated by, amongst others, Ines Papert in 2007 and Lucie Hrozova in early 2011 and Matějec redpointed the 40m line on 10 March.