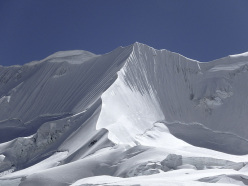 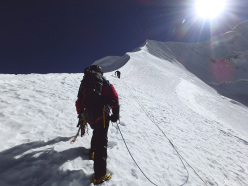 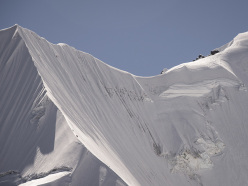 At the start of June the alpinists Marco Erbetta, Enrico Rosso and Father Antonio Zavattarelli made un unsuccessful attempt of the stunning West Ridge of Illimani, Cordillera Real, Andes.

A line. Perfect. This are the words used to describe the stunning West Ridge of Illimani in the Cordillera Real (Bolivian Andes) that leads via 1200m to the impervious and elegant North Summit (6403m) of the "golden eagle."

The line was attempted recently by the Italians Marco Erbetta and Enrico Rosso and Father Antonio Zavattarelli, currently a missionary at Penas, a small village on the Bolivian plateau between La Paz and Lake Titicaca. The trio were joined from Italy at the end of May by Paola Anzola and the photographer and videomaker Amedeo Rosso.

After the acclimatisation phase had been completed on the Huayna Potosi massif the group established camp below Illimani and spent a day attempting to access the West Ridge directly but turned back due to the large seracs.

The next day the expedition moved the camp to the "Nido del Condor" (5500m) to check out the a approach from the glacier, while on 8 June Zavattarelli, Erbetta and Rosso traversed across the glacier below the North summit of Illimani and set up a camp at the start of the West Ridge.

The climb continued early the next day, but having climbed 2/3 of the ridge and reached an altitude of circa 5900m the trio were forced to turn back: snow conditions were simply too dangerous, with slabs of snow formed by the wind on one face, and loose snow on the other.

After a difficult descent the trio continued to the "Nido del Condor" camp and reached this just before nightfall. The West Ridge of Illimani remains, according to the alpinists, one of the most beautiful in the Andes and a prime objective for the future.

The expedition would like to thank: Crispi, Rewoolution, Ferrino and Ruschetti.

With its four separate peaks Illimani is the third highest mountain in the Bolivian Andes and the highest in the Cordillera Real. The four summits are Pico del Indio (6109m), Pico Norte (6403m), Pico Central (6362m) and Pico Sur (6438m).