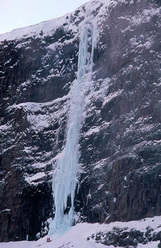 Albert Leichtfried, Markus Bendler, Ines Papert and Audrey Gariepy have set off for Iceland to explore its potential in memory of their friend Harald Berger who died tragically in December 2006.

Yesterday Albert Leichtfried and Markus Bendler departed from Austria for Iceland where, together with Ines Papert from Germany and Audrey Gariepy from Canada, they will soon explore the ice climbing potential in memory of their friend Harald Berger who died tragically on 21 December 2006.

The four will be accompanied by the photographers Hermann Erber and Rainer Eder and they hope to repeat existing lines and put up a series of new routes, expecially in the north and east of the island.

True to its name, Iceland is currently locked in deep winter and conditions, unlike in the Alps, are perfect. We hope to find out more from them and this small republic (which totals just over 300,000 inhabitants!) soon.