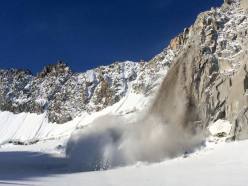 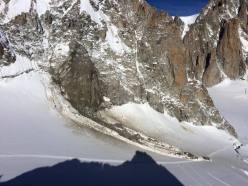 The morning a part of the SE Face of Tour Ronde collapsed spectacularly, fortunately causing no victims. Videos are published below of the rockfall that was witnessed by Gianluca Marra, a Mountain Guide from Courmayeur who told planetmountain.com that “a first rockfall took place at around 8:30, a second one just over an hour later” adding that “the rockfall occurred on a section of the SE Face, on the spur a bit to the right of the Normal Route up Tour Ronde.” Probably the intense cold of the last few days followed by today’s heat contributed to the collapse which, as can be seen from the photos, even reached the track that leads towards Col d’Entrèves.