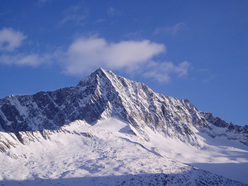 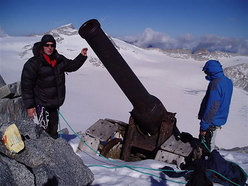 Cannone 149, nicknamed the hippopotamus, was draged up to above 3000m on Cresta Croce by the Italian army in 1916. Mount Adamello in the background.
Photo by Cain Olsen

While walking, mountaineering or rock climbing in the Adamello mountain range, one's mind goes back to the historical events that took place in this region: the Neolithic rock engravings, the strategic importance of this frontier land during the First World War, the resistance during the Second Wold War and the more recent pilgrimage of Pope John II to the glacier.

During the First World War, the Western border between Italy and Austria crossed two important mountain ranges: the Ortles-Cevedale and the Adamello-Presanella ranges. That meant that the two sides had to fight for over three and a half years, an Alpine War, with rock and ice positions at 3000 metres above sea level, in very difficult environmental and climatic conditions. Surviving against the elements was a daily task for the soldiers: winter lasted 8 months with heavy snow falls from October to May with 10 to 12 metres of snow falling each winter. The cold was a daily enemy, with temperatures dropping to -15°C during the day and -25°C at night. In this “white hell”, the Italian “Alpini” and the Austrian “Kaiserjager” as well as having to fight against each other, had to survive these extreme conditions, including enormous avalanches that caused more victims that the actual fighting.

On the Adamello range all the action that took place during these years was focused on conquering the Austrian strategic position “Monticelli” that controlled the Tonale mountain pass. The Austrians dug many tunnels and trenches on the front line between Monticelli and “Tonale Orientale”. They also occupied the “Paradiso, Castellaccio and Lagoscuro” passes that controlled the Italian town of Ponte di Legno.

The four day hike that described below is a magnificent trip to the centre of the Adamello mountain range and the Pian di Neve glacier (the largest in Italy with over 18 square kilometres). Due to global warming and the consequent rising temperatures, the icepack has been shrinking steadily over the last 100 years. The itinerary begins at Passo Tonale, a place that also gave the name to the volcanic rock of these mountains: Tonalite.

Best time of year
The best time of year for this itinerary is from mid June to mid September, when the mountain lodges are open. With your Guide, you can also create tailor made itineraries to meet your needs. The Adamello-Presanella and the near Ortles-Cevedale ranges are also ideal for ski touring itineraries during the ski mountaineering season (March-April).

How to get there
by car from the west: take the A4 motorway (Milano/Venezia) towards Venezia, exit Ospitaletto; follow SP19 and then SP510 towards Valle Camonica. Then follow SS42 towards Passo Tonale (Milano - Pontedilegno km 180).
by car from the north: take the motorway A22 (Brennero/Modena) and exit at S.Michele all'Adige; continue along the SS43 west towards Passo Tonale to the bridge at Mostizzolo (4 km after the village Cles) then take the SS42 up to Passo Tonale
by train: from Milan – take the train to Brescia. Then to Edolo. From here, catch the bus to Passo Tonale.