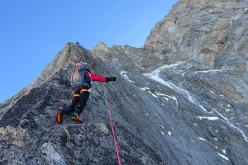 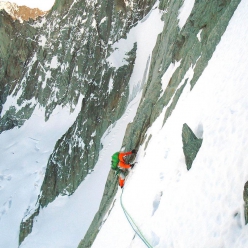 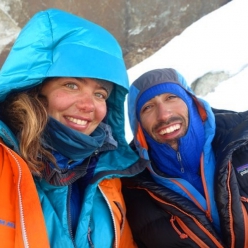 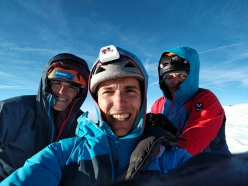 On Tuesday 19 February the French alpinists Léo Billon, Sébastien Ratel and Benjamin Védrines carried out a one-day winter ascent of the Cassin route up the Walker Spur on the North Face of the Grandes Jorasses. A few hours later, Switzerland’s Caro North and Argentinia’s Carlos Molina also completed the same route in winter having climbed it in a single day.

Taking advantage of the exceptional high pressure system that has settled across almost the entire Alps, last Tuesday two noteworthy ascents occurred on the Grandes Jorasses in the Mont Blanc massif. Both, completely coincidentally, on the same route, namely the Walker Spur, which for the first time ever has now been climbed in winter in a single day.

The first to succeed were French alpinists Léo Billon, Sébastien Ratel and Benjamin Védrines, members of the Chamonix-based High Mountain Military group (GMHM) who required 12 hours to repeat the legendary climb established from 4 to 6 August 1938 by Riccardo Cassin, Luigi Esposito, Ugo Tizzoni. A few hours later a second team composed of Switzerland’s Caro North and Argentina’s Carlos "Carlitos" Molina also completed the route in winter and in just one the day. The two teams had chosen the same goal independently, and only when they met at the bivouac the night before did they realise they were eyeing the same line.

Billon told planetmountain.com "We ascended on Monday afternoon, bivouacked at the foot of the Bergschrund, then set off at around 4:30 in the morning and we reached the summit at about 4.30 pm. The conditions were good, the rock was dry, the leader used climbing shoes for two pitches and also the Rebuffat corner, all the rest was climbed with mountaineering boots and crampons. We descend directly to the valley, taking 4 hours from the top to Planpincieux, and then we ate a pizza at Courmayeur: Some of us had never climbed the route before, but I knew the upper section since I’d climbed Rolling Stones in winter."

Molina explained "We had never climbed the route before and since the French had arrived before us at the bivouac, it was right that they set off first. We reached the summit at around 9:30 pm, then descended and slept near the Boccalatte hut. The next day we returned home. It was an incredible coincidence to all be on the same route on the very same day!"

The first winter ascent was carried out from 25 to 30 January 1963 by Walter Bonatti and Cosimo Zappelli.