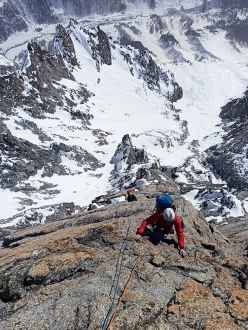 On 24/02/2021 the Italian mountaineers Matteo Della Bordella, Giacomo Mauri and Luca Schiera made the first ascent of Il Regalo di Berna, a new route on the South Face of the Grandes Jorasses dedicated to Matteo Bernasconi. Della Bordella reports.

On Wednesday 24 February the Ragni di Lecco climbers Matteo Della Bordella and Luca Schiera teamed up with Giacomo Mauri to make the first ascent of Il Regalo di Berna, Berna’s present, on the sunny south face of the Grandes Jorasses in the Mont Blanc massif. The route tackles a linea on the pillar called Pilastro Ghiglione, to the left of the classic Hypercouloir established in 1978 by Gian Carlo Grassi and Gianni Comino, and to the right of the route first ascended in 2019 by Enrico Bonino and Jon Bracey. 450m high, the route breaches difficulties up to 6b only and was established in single day using trad gear only; the trio left nothing behing, apart from a logical line and great recollection of their friend Matteo Bernasconi. This is Della Bordella’s second new route on the Grandes Jorasses in less than a year, after having established Il Grande Guerriero on the mountain’s East Face in August 2020.

After the new route on Piz Badile last December it would have been better to do something else instead of following in the footsteps of Berna. Unfortunately however, the mountain doesn’t abide to this sort of logic, so here I am with a new route he’d spotted first. I'm a little ashamed to talk about this line, in some respects it feels like I’m taking advantage of a friend. If he were here with us today he’d probably just tell me to get lost, and we’d end up having a beer and celebrating a new logical route that was out there, still waiting to be climbed.

Some of the last messages I exchanged with Berna were about this project. His last present: such a beautiful, logical and obvious line. While the ascent of Pizzo Badile was totally impromptu and came about more or less by chance, the same doesn’t hold true for this route which I actually wanted to climb last summer. I studied it carefully, put it off to a later date and now, after months of hibernation, the current high pressure system provided the right conditions to give it a go.

I was joined by Luca Schiera, my habitual climbing partner in crime on a thousand past adventures, and Giacomo Mauri, a young and talented climber from Lecco. After having skinned up to the Boccalatte refuge on 23 February, we set off at 4am the following morning and required just 4 hours to reach the buttresses below the main pillar, immediately to the right of the ice climb first ascended in 2019 by Enrico Bonino and Jon Bracey.

From here we started making our way up the rock face towards the most compact section of the pillar. We plan was to trace a logical and elegant line in the center of the face believing that, since days are short in February, we’d need two days to complete the ascent. But we nature gave us a special treat: solid rock and, above all, extremely weathered with all types of features. Furthermore, the technical difficulties were never extreme. Who ever said that all routes have to be sandbags! Surely there are plenty of easy routes still awaiting first ascents, no?

We split the main pillar into 5 pitches, the last of which was noteworthy because perfectly vertical and with great holds throughout.

From the top of the pillar we traversed across the ridge and emerged on the glacial plateau below Pointe Walkert of the Grandes Jorasses, where the normal route goes. We followed this downwards and returned to the Boccalatte hut at 19:00, fifteen hours after having left it.

Behind us lay a truly complete adventure, in an environment that was profoundly different from what I’d encountered in summer. The temperatures were perfect for rock climbing (wearing a windbreaker), above all though the huge quantity of snow kept us alert for all fifteen hours of this long day up in the mountains.

13.05.2020
Ciao Berna! Farewell to Matteo Bernasconi
On 12 May 2020 Matteo Bernasconi, the talented Italian alpinist, mountain guide and member of the Ragni di Lecco climbing club, perished in an avalanche. Born in 1982 and loved by everyone, Berna was ski mountaineering in Valtellina when the accident occurred.