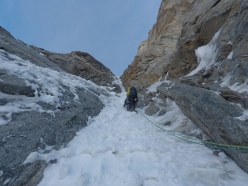 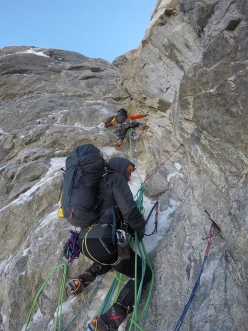 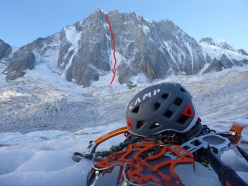 In the Mont Blanc massif the Spanish mountaineers Roger Cararach Soler, Marc Toralles and Bru Busom repeated the Japanese Couloir, the so-called 'Couloir central' that splits the North Face of the Grandes Jorasses. The three repeated the climb in 24 hours, without bivouacs, and at the start of the season.

News just in from the Grandes Jorrases, where one of the routes with the biggest reputations in the entire Mont Blanc massif has been repeated by the Spaniards Roger Cararach Soler, Marc Toralles and Bru Busom. The climb in question is the 1100m Couloir central, also referred to as Couloir Japonais, located between Pointe Walker and Pointe Whymper and first ascended by Yasuo Kanda, Yasuo Kato, Hideo Miyazaki, Toku Nakano and Kazuhide Seito from March 19th - 29th 1972 with an overall grade of VI 6, 6a, A1 / A2.

The difficulties of the Couloir Japonais depend very much on whether the route has come into condition or not and this is why the line is rarely repeated, in particular in autumn when the ice runnel has not formed properly. During their 29 September repeat Roger Cararach Soler, Marc Toralles and Bru Busom noted that the mountain was so dry they were forced to climb the route in a single push, without a bivy on the face.

Repeated officially for the first time in 2008 by French alpinists Julien Désécures and Arnaud Guillaume, in 2014 Britain’s Jon Griffith and Adam George repeated the route in the day after bivouacking at the base of the mountain. After his ascent Griffith described the Couloir as "a dark narrow gash perfectly bisecting one of the most famous alpine faces in the world. It’s a rarely visited climb on this austere face, menacingly capped by a huge overhanging cornice that every so often collapses and takes out everything beneath it."