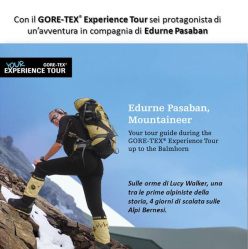 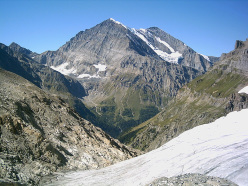 PORTFOLIO / gallery Portfolio: GORE-TEX Experience Tour: follow Edurne Pasaban in the footsteps of Lucy Walker to the summit of Balmhorn

GORE-TEX Experience Tour: follow Edurne Pasaban in the footsteps of Lucy Walker to the summit of Balmhorn

Register online until 31 December 2014 to relive an adventure that left its mark on the history of alpinism: ascend Balmhorn (3698m), Bernese Alps, together with Edurne Pasaban, following in the footsteps of Lucy Walker, the legendary mountaineer who made the first ascent of this Swiss peak in 1864.

Climb together with Edurne Pasaban, the Spanish alpinist who has climbed all the 14 highest mountains in the world? Today it's possible, thanks to the new project GORE-TEX® Experience Tour (GET) "History Sessions". In June 2015 two lucky winners will be able to enjoy an incredible adventure in the Bernese Alps, reliving the famous first ascent of Balmhorn (3698 m, first climbed by Lucy Walker – the legendary British mountaineer – in 1864. All you need to do is apply via the site www.experience-tour.com until December 31st.

Precisely 150 have passed since Lucy Walker climbed Balmhorn together with her father Frank Walker, her brother Horace Walker and the guides Jakob Anderegg and Melchior Anderegg via its SW crest, also known as the Zackengrat. For this monumental climb Walker had to deal not only with the objective difficulties of the ascent, but also with her own health problems as well as the view that women should stay at home instead of climbing. But Walker certainly wasn't the type of person who sits around sipping tea with her friends all day: after Balmhorn she ascended Wetterhorn, Lyskamm and Piz Bernina, while in 1871 she became the first woman to set foot on the summit of the Matterhorn. Lucy Walker's life was made of dreams, increasingly higher ones, just like those of Spain's Edurne Pasaban, another “tough cookie” who during the last decade has become one of the most famous Himalayan alpinists of our time. In June 2015 it will be possible to join the Basque mountaineer to climb Balmhorn and follow in the footsteps of Lucy Walker.

To apply for the GORE-TEX® Experience Tour all you need to do is register on www.experience-tour.com until 31 Descember. You won't climb in hobnailed boots and skirt, but Edurne Pasaban will carry cakes and champagne to the summit. To celebrate the present, past and future. Just like Walker did on that 21 July 1864.