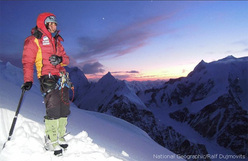 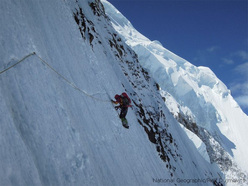 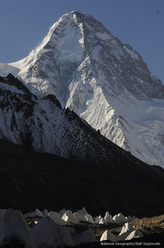 At 18:18 local time Gerlinde Kaltenbrunner from Austria reached the summit of K2. In doing so she has become the first woman in the world to climb all fourteen 8000m peaks without the use of supplementary oxygen.

The news is just in: Gerlinde Kaltenbrunner has reached the summit of K2. The Austrian mountaineer stood on top of the 8611m peak at 18:18 local Pakistan time, and shortly afterwards she was joined by her other expedition members Vasiliy Pivtstov and Maxut Zumayev from Kazakhstan and Darek Zaluski from Poland.

With this K2 success Gerlinde Kaltenbrunner becomes the first woman in the world to have climbed all 14x8000m peaks without the use of supplementary oxygen. In May 2010 Edurne Pasaban from Spain climbed all fourteen peaks (using supplementary O2 for Everest) while a few months earlier the South Korean climber Miss Oh Eun-sun claimed - accompanied by a wake of criticism and doubts - the first female tour of 14 Himalayn giants.

Today's summit arrived after a long and extenuating expedition during which the small group of mountaineers, led by husband Ralf Dujmovits, climbed the difficult North Ridge. First climbed by a Japanese expedition in 1982, in its nigh 30 year history only 20 climbers have ascended this route to the summit.

To reach the top of the second highest mountain in the world the alpinists arrived at Base Camp at the start of July and after having established four high altitude camps they set off for the summit push 8 days ago. Due to prohibitive conditions Ralf Dujmovits opted to descend, while the remaining four decided to continue. After a bivy at 8300m they set off last night at 01:00 but due to intense cold retreated and waited until 07:30.

Their wait was repaid by magnificent weather, not a cloud in sight and almost complete lack of wind. Nevertheless the climbers had to fight hard to beat a trail through the fresh snow and at 11:15 they reached 8400m. At 16.00 the reached the end of the ramp of the Japanese Couloir, while half an hour later they finally reached the start of the summit ridge. At 18.18, finally the much dreamt of summit.

All four are currently engaged in the difficult and dangerous descent. Our thoughts go to them, for a safe and happy return to Base Camp.